In this update, you’ll find ads for particularly obscure markets like witchcraft, remote viewing, chants, mind control, telekinesis, etc. Don’t discount these markets as being filled with gullible nutters. Many of these ads had years worth of insertions. Look at the way Gene Schwartz massages the dreams, desires and fantasies of the prospect. Many of these markets are seeing a resurgence of response today.

There are other relevant niches in this update as well.

I spot several evergreen subjects among these including one for Edward Mrvicka’s book below, which is now a late night television infomercial for a book called, “Secrets Banks and Lenders Don’t Want You to Know” by Richard Weathington. Very much in the style of Kevin Trudeau with a $500 piece of software as the backend.

Three words from this book saved this man’s arm, and his life! This is a space ad written by Gene Schwartz to promote his book, “The Sound of One Mind Thinking.”  A spiritual ad characterized by Gene’s classic future pacing. Example: “Alone? Desperate? Afriad? Then you start on page 13.

Doctors Claim New Miracle Drug Reverses Aging Process — Can Prolong Healthy Life Up To 120-150 Years of Age… No harmful side effects…safer than aspirin. “H3 in the Battle Against Old Age” by Henry Marx. The “dramatic” before-and-after photo “as shown on CBS news” gives this 1980’s display ad its juice.

NOW — You can Live Like A King and never want again with the Miracle Power of… OMNI-COSMOS. It’s true! This hidden energy power responds at once  to help you gain endless streams of wealth…control the thoughts of others…achieve protection from evil…make illness disappear…and much more!

Revealed At Last! 265 “Kinetic Energy” Chants Which Will Bring You Anything You Want Automatically! (Raymond Buckland, “The Magic of Chant-o-Matics”)

Now — Enjoy a life of unbelievable riches, lasting love and constant protection with the secrets in this startling WITCH BOOK — THE MAGIC POWER OF WITCHCRAFT (You have to love the dripping candle font — what a grabber. (Gavin Frost and Yvonne Frost, “The Magic Power of Witchcraft”) The premium, “The Witches Protection Amulet,” must have drove a lot of sales for this book because this ad had plenty of insertions.

Is Youth Restorative X The Secret of Perfect Health and Complete Freedom From Disease? (Ad for “Rapid Healing Foods” by Ben Davis.)

Dr. Marilyn Rosanes-Berrett says, “Unless you are a rare case, you could learn to see better without glasses than you now see with them.” The claim: “improved sight — without glasses — is within the reach of millions of people!” The layout: more advertorial in appearance than anything else in this batch —  the headline is even in lower case. (“Do You Really Need Eyeglasses?”)

The Home Library of 501 FREE and LOW-COST MEDICAL TREATMENT and Services. Yes, 501 different ways to save time, money and sheer agony the next time you need a doctor…a dentist…a pharmacist…a psychiatrist…or a hospital. Including —

Sexual fulfillment after 40…A distinguished psychiatrist shows that men in their 40’s, 50’s, 60’s and even beyond can enjoy a sex life in many ways as satisfying as when they were in their twenties. (Dr. Louis P Saxe “Sex And The Mature Man”)

“Let me show you the secrets of WHITE WITCHCRAFT” — secrets that have helped others: bring money and prosperity…gain power over others and control their actions…attract and hold a lover…win at gambling…ward off the hex and stop the evil eye…get rid of demons (Al G. Manning “Helping Yourself With White Witchcraft” 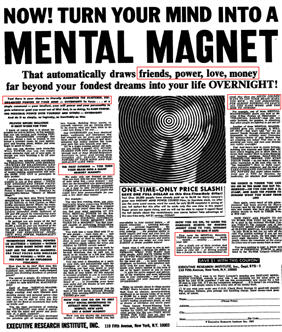 “Friends, power, love, money far beyond your fondest dreams into your life OVERNIGHT!”

These belong to a class of power words that quietly, yet surely bypass the psychic gatekeepers designed to defend against advertising overload.

How they work is less important than that they work and a generous sprinkling of them will give a spark to almost any ad.

See how Gene Schwartz infused this ad with plenty of “power words” and word pictures which leap off the page. You can download it by clicking on the thumbnail to the left.

Eugene Schwartz wrote this ad just over 40 years ago and insertions mushroomed into newspapers and magazines all across the country.

It even appeared in the conservative financial publication, “Barron’s National Business and Financial Weekly.”

It’s a little high brow yet at its core, it’s a business opportunity ad.

You can click on the thumbnail to the left for a fully readable PDF of the ad but if you do nothing else, put this one into your headline swipe file.

Few could package a giant (often bordering on an unbelievable) promise into an irresistible read like Eugene Schwartz.

The “Do you have the courage…” preamble really adds topspin to the claim.

Imagine running across a headline today that reads: “Now You Can Earn a Half Million Dollars a Year.”

Even for the average white collar worker reading Barron’s, this is hard to swallow.

Yet this ad had a ton of insertions over the course of several years.

Were people just gullible in the 1960’s?

This is one of those evergreen headlines that’s very customizable today. The real beauty of it is it’s still virgin swipe material for use online.

Unlike the now nauseating “Who else wants?” headline which mindless marketers continue to ape, this is the kind of headline that can add a jolt of power to your promotions and make them stand out from the rest of the crowd.

Yes, there are a few dated elements to the ad like the exclusive use of masculine pronouns but Gene’s copy is timeless.

Here are the lapel grabbing fourth and fifth paragraphs of the ad.

And above all, [for the kind of man] who is willing to accept the responsibility for other men’s futures, the loneliness that always surrounds the person in command, and the envy and hostility that will plague him for the rest of his life.

Do you have the courage to reach out for this kind of life? To accept its incredible rewards and incredible hazards? If you do, read on. If you don’t, consider yourself lucky and turn the page — there is nothing left in this ad that will make an iota of sense to you. 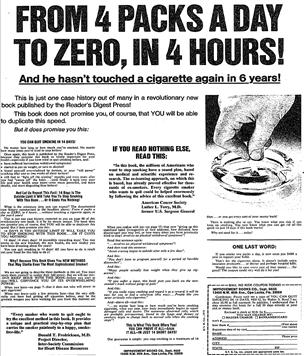 What happens when the world’s most successful direct response copywriter does an “internship” educating underprivileged kids in New York City’s Harlem?

Why, some of the winingest ads ever written in the childhood education market.

Gene was so passionate about methods of learning and educating children that he left the comfort of his Park Avenue apartment several times a week and traveled three miles north to Harlem while pioneering a pet program. That program sought to bridge the vast divide which separated black kids in Harlem from their wealthy, white counterparts in Gene’s neighborhood.

It had a lifelong impact on the lives of many of these children.

Gene, of course applied the same learning strategies at home with his son, Michael who went on to have a bright career on Wall Street, thanks to the mathematics and physics workouts by his dad’s side. (See photo in: “How to Turn Your Child Into a Classroom Wizard.”)