Worth it? Yes, but I’ve gotten a severe case of withdrawal.

So, for those who asked why I haven’t been posting, I’ll be more than making up for it with over a year’s worth of content.

I’ll also be tearing down and rebuilding most of my websites, including this one.

Here’s one of the better ones I’ve been sitting on for a while. It’s a 15 ad campaign in one PDF, which you can download through the link below.

In the 1980s, International Paper was locked in a no-holds-barred struggle with five major competitors whose products varied little.

International Paper set out to create a reason why customers should prefer I.P. above the rest, even if only for a feeling of the “warm and fuzzies.”

But can that translate to sales and customer loyalty, especially for a commodity product like paper?

The campaign — “We believe in the power of the printed word” — was a smashing success.

It was conceived by Ogilvy creative director, Billings S. Fuess, who relied on celebrities with credibility in education, like:

While the ads were published under the bylines of these well knowns, it was Fuess who spent three to four weeks researching each ad and one week writing the first draft.

27 Million Requests for Copies of These Ads

The initial campaign targeted the 15-to-30 age group, mainly those in high school or college, under the banner of the “College Survival Kit.”

But as these two-page spreads gained attention from widespread insertions, I.P. was inundated with requests for copies of theses ads from all age groups. They later spun off the “Business Survival Kit.”

Doubleday was one of four publishers to put in a bid to publish a compilation of these ads after the fourth ad hit the press.

Can you imagine anything so crazy… print ads being turned into a book? 🙂

But the copies were swept up and out of print copies now sell on Amazon for $273 and up.

Most wouldn’t peg a paper manufacturer as the source of such ingenious product and brand differentiation.

It just goes to show there are countless ideas for creating a competitive advantage out of thin air.

“The Power of the Printed Word” 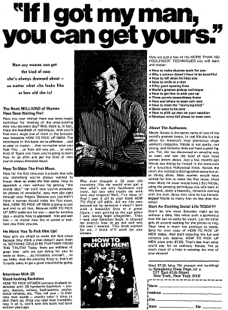 This is a 4-page Christmas advertising spread from Marshall Field from 1950.

Growing up in and around New York City, I recall what a big deal the department store windows were around Christmas time.

Fascinating and nostalgic advertising in the per-Internet days and respondents to this ad could order a booklet with the story about the Marshall Field Christmas windows.

There is great excitement in Wonderland these days now that the Uncle Mistletoe windows are open along State Street. Many of the animals have roles in the Mistletoe adventure staged there and all the other Wonderland folks are coming downtown (on Uncle’s magic rug, of course) to see the windows.

“Why, this is more fun than being on the stage,” exclaimed Obediah Pig the other day.

“It is being on the stage,” declared Michael O’Hare.

“That’s right,” said Uncle Mistletoe, “and we’ve got all those children to entertain and they’re the most wonderful audience in the world.”

Edward Bear, who had been sitting to one side, spoke up, “This is the most exciting adventure you’ve ever had, Uncle Mistletoe. I hope every boy and girl can get to see what happens.”

“You are right, Edward Bear,” said Michael O’Hare. “This year’s adventure is really exciting. It’s called, ‘A Party for Santa,’ and it’s all about a surprise that Aunt Holly and Uncle Mistletoe plan for the old gentleman when he finishes his trip around the world.” 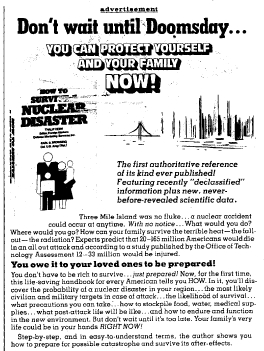 Here’s a half-page vertical insertion for How to Survive a Nuclear Disaster — apropos for today’s apocalypse foretold in the Mayan calendar.

You can protect yourself and your family NOW!

Three Mile Island was no fluke… a nuclear accident could occur at anytime. With no notice …What would you do? Where would you go? How can your family survive the terrible heat—the fallout— the radiation? Experts predict that 20-165 million Americans would die in an all out attack and according to a study published by the Office of Technology Assessment 12-33 million would be injured.

You owe it to your loved ones to be prepared!

You don’t have to be rich to survive… just prepared! Now, for the first time, this life-saving handbook for every American tells you HOW. In it, you’ll discover the probability of a nuclear disaster in your region… the most likely civilian and military targets in case of attack… the likelihood of survival… what precautions you can take… how to stockpile food, water, medical supplies…what post-attack life will be like, and how to endure and function in the new environment. But don’t wait until it’s too late. Your family’s very life could be in your hands RIGHT NOW! 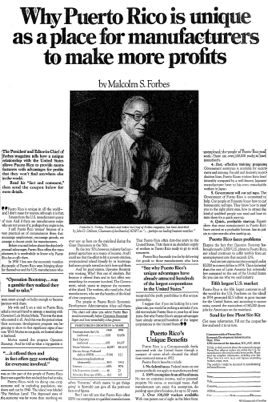 This ad with Malcolm Forbes was part of the series Ogilvy and Mather created for the Commonwealth of Puerto Rico.

They’re flatly some of the best business development ads ever written  and were responsible for changing the landscape of the island.

Here is the original space ad written by David Ogilvy himself.

I would’ve opted for Forbes to don his after hours motorcycle leather instead of the CEO look, so it’s good I wasn’t part of that creative decision.