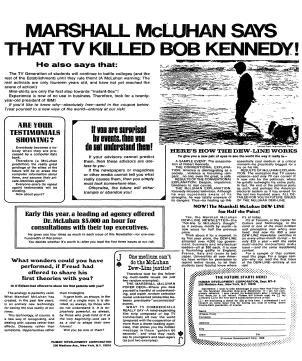 (Darn, I was too late to register the domain!)

Supposedly, McLuhan had a casting call for several Madison Avenue agencies before settling on Eugene Schwartz.

There was an even shorter lived collaboration with the Buddhist author and thinker, Alan Watts, who Gene wrote a successful ad for —  his best-selling, The Book, through the same corporate entity.

He also says that:

The TV Generation of students will continue to battle colleges (and the rest of the Establishment) until they rule them! (A Mcluhan warning: The real activists are only fourteen years old, and have not yet reached the scene of action!)

Mini-skirts are only the first step towards “Instant-Sex”!

Experience is now of no use in business. Therefore, look for a twenty-year-old president of IBM!

Here’s what Media Power wrote of the ad and newsletter.

Marshall McLuhan Says That TV Killed Bob Kennedy!” reads the headline of a full-page advertisement for McLuhan’s expensive newsletter in mid-1969. “Kennedy misused television,” explains the copy. “Although he was supremely aware of its strengths, he was fatally unaware of its dangers. Thus-by heating up this essentially cool medium at a critical point- he practically begged for a try on his life.” McLuhan’s thesis, as usual, is dubious, to say nothing of his taste, but his commercial sense, as always, is infallible: The life-and-death connection between the Kennedys and the media is a fact that surely must have intrigued his potential customers.