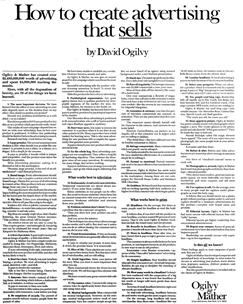 Ogilvy & Mather unleashed a series of “house ads” in the late 60’s to early 70’s, which dazzled readers with its depth, and hooked more whale-sized clients than any house ads before or since. Many tens of millions were spent on these insertions in major publications worldwide.

If you could pass through a time machine and transport to any agency of your choice, the direct response division of O&M, during the late 60’s-early 70’s, is where you’d want to be. Drayton Bird, Gary Bencivenga and David Deutch are all O&M alumni from around this time.

“How To Create Advertising That Sells” is a remarkable 1,909 words long and draws on the direct response foundation laid by Claude Hopkins, John Caples and the statistical polling methodology David Ogilvy learned at Gallup.

You can find Ogilvy’s commentary on this series of ads on page 65 of “Ogilvy On Advertising.” What…you don’t have “Ogilvy On Advertising?” I’m barring your IP address from this site until you get it…especially since you’re one of the few who possesses this ad word-for-word. And in case you haven’t looked at the book in a while, a sharpshooter assisted by an electron microscope would be challenged to make out the body copy in the ad.

It seems the O&M series saw fewer and fewer insertions as Ogilvy’s influence over the agency weakened with time. However, these ads certainly left their mark.

You can find a list of the other ads in the series here.

Besides clients, other agencies were inspired by these bold space ads. Several agencies spun off their own versions, in the spirit of the house of Ogilvy. One series that comes to mind was a 1980’s advertising partnership between The Wall Street Journal and a rotation of Madison Avenue agencies under the slogan, “The Wall Street Journal. It works.”

So, while it’s true a freelancer could never handle the corporate giants these ads were designed to attract, far bigger and better paying clients await those with the guts and know-how to put this kind of ad together today. And with the 24/7 research power of the Internet, it’s possible to assemble the kind of data which once took whole departments, mere decades ago.

Moreover, aren’t we all getting a little fatigued reading the same type of customer acquisition sales letters, promising the six secrets of psychological persuasion (and the like), some writer has labored months over.

Here’s the O&M masterpiece, “How To Create Advertising That Sells,” in its original format.

How to Create Advertising that Sells

Ogilvy & Mather has created over $1,480,000,000 worth of advertising. Here, with all the dogmatism of brevity are 38 of the things we have learned.

2.  Large promise. The second most important decision is this:  what should you promise the customer?  A promise is not a claim, or a theme, or a slogan.  It is a benefit for the consumer.  It pays to promise a benefit which is unique and competitive, and the product must deliver the benefit your promise.  Most advertising promises nothing.  It is doomed to fail in the marketplace.  “Promise, large promise, is the soul of an advertisement”  – said Samuel Johnson.

3.  Brand image. Every advertisement should contribute to the complex symbol which is the brand image.  95% of all advertising is created ad hoc.  Most products lack any consistent image from one year to another.  The manufacturer who dedicates his advertising to building the most sharply defined personality for his brand gets the largest share of the market.

4. Big ideas. Unless your advertising is built on a big idea, it will pass like a ship in the night. It takes a big idea to jolt the consumer out of his indifference – to make him notice your advertising, remember it and take action. Big ideas are usually simple ideas. Said Charles Kettering, the great General Motors inventor: “this problem, when solved, will be simple.” Big, simple ideas are not easy to come by. They require genius – and midnight oil. A truly big one can be continued for 20 years – like our eye patch for Hathaway shirts.

5. A first-class ticket. It pays to give most products an image of quality – a first-class ticket. Ogilvy & Mather  has been conspicuously successful in doing this – for Pepperidge, Hathaway, Mercedes Benz, Schweppes, Dove and others. If your advertising looks ugly, consumers will conclude that  your product is shoddy and they will be less likely to buy it.

6. Don’t be a bore. Nobody was ever bored into buying a product. Yet most advertising is impersonal, detached, cold – and dull. It pays to involve the customer. Talk to her like a human being. Charm her. Make her hungry. Get her to participate.

7. Innovate. Start trends – instead of following them. Advertising which follows a fashionable fad or is imitative, is seldom successful. It pays to innovate, to blaze new trails. But innovation is risky unless you pre-test your innovation with consumers. Look before you leap.

8.  Be suspicious of awards. The pursuit of creative awards seduces creative people from the pursuit of sales.  We have been unable to establish any correlation whatever between awards and sales.  At Ogilvy and Mather, we now give an annual award for the campaign which contributes the most to sales. Successful advertising sells the product without drawing attention to itself, it rivets the consumer’s attention on the product.  Make the product the hero of your advertising.

9.  Psychological Segmentation. Any good agency knows how to position products for demographic segments of the market – for men, for young children, for farmers in the south, etc.  But Ogilvy and Mather has learned that it often pays to position for psychological segments of the market.  Our Mercedes-Benz advertising is positioned to fit non-conformists who scoff at “status symbols” and reject flim-flam appeals to snobbery.

10.  Don’t bury news. It is easier to interest the consumer in a product when it is new than at any other point in its life.  Many copywriters have a fatal instinct for burying news.  That is why most advertising for new products fails to exploit the opportunity that genuine news provides.  It pays to launch your new product with a loud boom-boom.

11.  Go the whole hog. Most advertising campaigns are too complicated.  They reflect a long list of marketing objectives.  They embrace the divergent views of too many executives.  By attempting too many things, they achieve nothing.  It pays to boil down your strategy to one simple promise – and go the whole hog in delivering that promise.

What Works Best In Television

13. Problem-solution (don’t cheat!) You set up a problem that the consumer recognizes. And you show how your product can solve that problem. And you prove the solution. This technique has always been above average in sales results, and it still is. But don’t use it unless you can do so without cheating: the consumer isn’t a moron. She is your wife.

15. Slice of life. These playlets are corny, and most copywriters detect them. But they have sold a lot of merchandise, and are still selling.

16. Avoid logorrhea. Make your pictures tell the story. What you show is more important than what you say. Many commercials drown the viewer in a torrent of words. We call that logorrhea, (rhymes with diarrhea.) We have created some great commercials without words.

19.  Stand-ups. The stand-up pitch can be effective, if it is delivered with straightforward honesty.

20.  Burr of singularity. The average consumer now sees 20,000 commercials a year; poor dear.  Most of them slide off her memory like water off a duck’s back.  Give your commercials a flourish of singularity, a burr that will stick in the consumer’s mind.  One such burr is the mnemonic device or relevant symbol – like the crowns in our commercials for Imperial Magazine.

21.  Animation and cartoons. Less than 5% of television commercials use cartoons or animation.  They are less persuasive than live commercials.  The consumer can not identify herself with the character in the cartoon and cartoon’s do not invite belief.  However, Carson-Roberts, our partners in Los Angeles, tell us that animation can be helpful when you are talking to children.  They should know, they have addressed more than 600 commercials to children.

22.  Salvage commercials. Many commercials which test poorly can be salvaged.  The faults revealed by the test can be corrected.  We have doubled the effectiveness of a commercial simply be re-editing it.

24.  Grabbers. We have found that commercials with an exciting opening hold their audience at a higher level than commercials which begin quietly.

What Works Best In Print?

25. Headline. On the average, five times as many people read the headline as read the body copy.  It follows that, if you don’t sell the product in your headline, you have wasted 80% of your money.  That is why most Ogilvy and Mather headlines include the brand name and the promise.

26.  Benefited headline. Headlines that promise to benefit sell more than those that don’t.

27.  News and headlines. Time after time we have found that it pays to inject genuine news into headlines.  The consumer is always on the lookout for new products or new improvements in an old product, or new ways to use an old product.  Economists – even Russian economists – approve of this.  They call it “informative” advertising.  So do consumers.

28.  Simple headlines. Your headline should telegraph what you want to say – in simple language.  Readers do not stop to decipher the meanings of obscure headlines.

29.  How many words in a headline? In headline tests conducted with cooperation from a big department store, it was found that headlines of 10 words or longer sold more goods than short headlines.  In terms of recall, headlines between 8-and-10 words are most effective.  In mail order advertising, headlines between 6-and-12 words get the must coupon returns.  On the average, long headlines sell more merchandise than short ones – headlines like our “At 60 miles an hour, the loudest noise in this new Rolls-Royce comes from the electric clock.”

30.  Localize headlines. In local advertising, it pays to include the name of the city in your headline.

31.  Select your prospects. When you advertise your product which is consumed by a special group, it pays to flag that group in your headline – mothers, bedwetters, going to Europe?

32. Yes, people read long copy. Readership falls off rapidly up to 50 words, but drops very little between 50 and 500 words (this page contains 1,909 words, and you are reading it). Ogilvy & Mather has used long copy – with notable success – from Mercedes Benz, Cessna Citation, Merrill Lynch, and Shell Gasoline. “The more you tell, the more sell.”

33. Story appeal and picture. Ogilvy & Mather has gotten noticeable results with photographs, which suggest the story. The reader glances at the photograph and asks himself, “what goes on here?” Then he reads the copy to find out. Harold Rudolph called this magic element “story appeal.” The more of it you inject into your photograph, the more people look at your advertisements. It is easier said than done.

36. Use captions to sell. On the average, twice as many people read the captions under photographs as read the body copies. It follows that you should never use a photograph without putting a caption under it; and each caption should be a miniature advertisement for the product – complete with the brand name and promise.

Number 38: Repeat your winners. Scores of great advertisements have been discarded before they have begun to pay off.  Readership can actually increase with repetition – up to five repetitions.

Is this all we know?

These findings apply for most categories of products. But, not to all. Ogilvy & Mather has developed a separate and specialized body of knowledge on what makes for success in advertising food products, tourist destinations, proprietary medicines, children’s products – and other classifications. But, this special information is revealed only to the clients of Ogilvy & Mather.