(Updated October 12. 2008) Last week saw the worldwide rout of the financial markets and squarely placed the current bear market among the worst in history.

Here is RON PAUL on the global financial crisis, the potential for economic depression and where we’re headed. One of the few in Washington whose position on sound economics and the dangers of the Federal Reserve system have been remarkably consistent for decades. 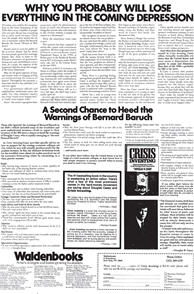 Here’s a partial list of the entrance keywords from search engines, visitors typed to arrive at this site today (9/25/08).

* gold value during the depression

* how much silver will i need to survive the coming depression

* how not to lose everything in this economy

* how to make it through the coming depression

* how to prepare for the coming depression

* what will happen if we enter a depression?

* who made fortunes during the great depression?

Since this is a website about direct response advertising and marketing and NOT economics or investing, it’s interesting to note the FLOOD of searches by a rightfully nervous public.

Coincidentally, today, I entered my first protracted message board discussion (in years) about the present economic mess. If you can’t get passionate and incredibly proactive about this potential, worldwide, economic catastrophe, then about what can you?

Understand, I hope we can steer the ship through this perilous sea to safe harbor, but it may be wise to start considering your ‘PLAN B.’

My ‘flame war’ started by questioning the fundamental guarantee of the F.D.I.C. (Federal Deposit Insurance Corporation) of protecting depositors up to $100,000 at F.D.I.C institutions.

This was the worried (and actively thinking) original poster’s comment that inspired my reply:

“Do you feel that it is safe to have all our money in the bank? Can banks really shut the doors if the crisis gets worse? I know that our money is FDIC insured but is it really if the situation would get worse?

I also have some assets in a safety deposit box in my bank? Is it possible to be denied access the box if situation worsens.”

This was the gist of my reply:

“Did you see the half-mile long lines of customers waiting outside of Northern Rock Bank to WITHDRAW over a billion pounds Sterling last year?

What are your chances of getting by that kind of line to get to your box if there’s a RUN on your bank?

After what’s happened (so far) this year, I don’t think anyone would take poison on the fact that it’s impossible to occur at banks like JP Morgan Chase, Wells-Fargo, Bank of America, etc.

As far as FDIC ‘protection’ goes, that’s a 1930’s Depression-era creation that’s never been *tested* has it?

I mean, it’s only paper after all isn’t it? But everyone will be scrambling for that same paper at the same time *if* a worst case scenario happens.”

The website founder, who’s a very bright man, but likely influenced by political correctness and putting on a brave face for his membership site subscribers answered:

This was several hours before the largest bank failure in U.S. history, Washington Mutual (WaMu), hit the wires, eclipsing the earlier failure this year of IndyMac by 1000%.

“Yes, I know what the teller at the bank says about the FDIC.

And it did hold up under the S&L Crisis in the 80’s, but as far as I know, they’ve mostly bailed out Podung banks that’ve gone bust. There’s never been a *real* test of the fundamental guarantee.

Assuming under a worse case scenario than today that dollars are even worth anything, how would they insure payouts on a massive scale and on what schedule? How long would depositors have to wait for an insurance check from the FDIC?

One of the banks I use, Wachovia, acquired a $25 billion sub-prime asset two years ago. That’s all a write-down now and Wachovia’s cash reserves were the lowest they’ve been
even before declaring it.

I have no pretension of being a financial luminary. Heck, I think even the greatest financial minds on the planet, including Warren Buffet and George Soros, have NO idea what might happen next.

The bottom line is:

So no one has any business making pronouncements about what will or won’t happen.

Likewise, no one with a family depending on them should think: “The government will save us, so everything will be fine.”

Here’s what I suggest as an INSURANCE POLICY if the bottom completely falls out.

Do you remember Pascal’s wager?

A suggestion posed by the French philosopher Blaise Pascal, that even though the existence of God cannot be determined through reason, a person should “wager” as though God exists, because in so living has potentially everything to gain, and certainly nothing to lose.

This applies directly to the present world financial system crisis.

*IF* there is a PANIC and a run on your bank, you will NOT be able to get a hold of YOUR cash. Everybody will be scrambling for it at the same time. Your credit cards will be completely worthless. Depositors will be prevented from withdrawing any cash, just as I observed firsthand while in Argentina several years ago, when the peso collapsed.

LOTs of greenbacks, fungolas, C-notes. The stuff we used to carry before credit cards.

Get to your bank a.s.a.p. and withdraw MORE cash than you feel comfortable withdrawing. Sure, the teller will look at you a little funny and call her manager over to approve the transaction, but they are there to serve at YOUR pleasure, not you at their’s.

If nothing occurs, you’ve lost a dollar or two in interest.

If the sky falls, you’ll have bountiful greenbacks to buy gas, food, water, clothing and all the wonderful things on the survivalists’ checklist, while your neighbors will be reduced to a Stone Age existence.

The upshot, if you hold a mortgage, is the lender holding your note may become extinct.

It’s Sunday night 9/14/08 and Merrill-Lynch has already sold itself to Bank of America, Lehman Brothers will likely be de-listed tomorrow morning and insurance giant, A.I.G. is days away from collapse if it doesn’t get a $40 billion infusion from the Fed. My bedtime reading tonight is Gary North’s Last Train Out.

Where’s Howard Ruff when you need him?)