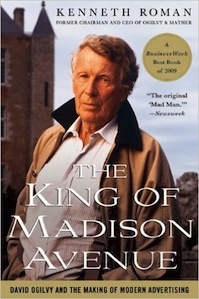 In February of 2010, (Yes, years ago but it was a great interview!) I had the chance to chat with author and former Ogilvy & Mather CEO, Ken Roman, at the invitation of my friend, Byrne Hobart. (I’m reposting with some edits in March of 2021.)

What did we talk about?

Byrne and I, of course, grilled him on his latest book, The King of Madison Avenue: David Ogilvy and the Making of Modern Advertising.

Like a typical, turbo-charged CEO, Ken called into the conference line from the back of a yellow cab cruising through the snow covered streets of Manhattan.

This is a book that tells the rest of the story about David Ogilvy, the most famous advertising man in the world, from someone who worked shoulder-to-shoulder with him for decades.

More than just a book about Ogilvy, The King of Madison Avenue reveals the evolution of modern direct response advertising in the 20th Century. END_OF_DOCUMENT_TOKEN_TO_BE_REPLACED

Joseph Segel created over 20 businesses over the past 70+ years, including The Franklin Mint, QVC, National Business Services, and the ritzy Le Mirador Resort in Switzerland. One of the great lessons of his career: "If you want a home run, you … END_OF_DOCUMENT_TOKEN_TO_BE_REPLACED

Dr. Chris Tomshack built HealthSource into one of the biggest chiropractic franchises in the world on the back of long copy and providing the solution to the biggest driver that gets prospects to take action... PAIN! "The 5 WARNING SIGNS of … END_OF_DOCUMENT_TOKEN_TO_BE_REPLACED

A client I hadn't heard from in a while contacted me at the end of last year. He had a print ad pulling a very respectable three times ad cost and wondered if he could get it even higher. His objective went beyond merely trying to bump response … END_OF_DOCUMENT_TOKEN_TO_BE_REPLACED

One late summer evening, two copywriters sat down at their keyboards to craft sales letters for almost identical products. They were very much alike, these two copywriters. Both had years of experience writing every type of ad and were dynamos at … END_OF_DOCUMENT_TOKEN_TO_BE_REPLACED