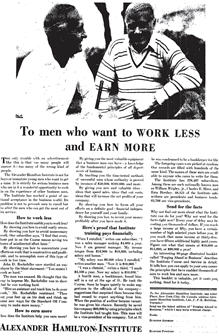 There’s been a lot written on Bruce Barton, so I figured I’d add a small piece to the pile.

Bruce Barton packed a lot into one lifetime. He was…

* Chairman and co-founder of one of the world’s largest advertising agencies, BBD&O

* United States Congressman and a prominent rival of FDR and the New Deal. (FDR singled out Barton and two other Republican foes in the fantasy firm of  “Martin, Barton & Fish.”)

* A source of countless cling-to-the-memory quotes and catchy phrases (like: “If advertising has flaws, so has marriage.”)

* And…one heck of a copywriter.

The ad in this post showcases the marvelous lead generation talent Barton exhibited for many years for his client, The Alexander Hamilton Institute, the preeminent executive  development program of that time.

Interestingly, the photo in the ad is of then Governor of New York, FDR, with golf club in hand and, if I’m not mistaken, Bruce Barton.

An interesting headline to split test against the one used may have been: “Rockefeller Barked…Put Your Feet Up On the Desk!”

As always, you can click on the thumbnail above to see the ad in its original layout.

To Men Who Want to Work Less and Earn More

The only trouble with an advertisement like this is that too many people will answer it — too many of the wrong kind of people.

The Alexander Hamilton Institute is not for boys or immature young men who want to get a raise. It is strictly for serious business men who see in it a wonderful opportunity to cash in on the experience of other businessmen.

The Institute has reached a point of national acceptance in the business world. Its problem is not to persuade men to enroll but to select the men who can get the most out of its service.

How to Work Less

How does the Institute enable you to work less?

By showing you how to avoid costly errors.

By showing you how to avoid unnecessary work. One subscriber says, “I find that every hour put in on the course means saving ten hours of misdirected effort later.”

By showing you how to concentrate your efforts on work that is constructive and profitable, and to accomplish more of this type of work in less time.

John D. Rockefeller once startled an employee by the blunt statement: “You mustn’t work so hard.” The man was amazed. He thought that the way to impress Mr. Rockefeller was to show that he was working hard.

“Hire an assistant and teach him to do your work,” Mr. Rockefeller continued. “Then put your feet up on the desk and think up some new ways for the Standard Oil Company to make more money.”

How to earn more

How does the Institute help you earn more?

By giving you the most valuable equipment that a business can have – a knowledge of the fundamental principles of all departments of business.

By teaching you the time-tested methods of successful men whose authority is proved by incomes of $50,000, $100,000 and more.

By giving you new and valuable ideas – ideas that speed sales, ideas that cut costs, ideas that will increase the net profits of your company.

By showing you how to focus all your efforts on a definite goal – financial independence for yourself and your family.

By showing you how to invest your money profitably after you have made it.

A fourth man, a bookkeeper, found himself in a rut at the age of 31. He took the Course. Soon he began quietly to make suggestions to the officials of his company – suggestions that surprised them because they had ceased to expect anything from him. When the position of auditor became vacant, he was given his chance. Recently he saved his company $60,000 by using principals which the Institute had taught him. This man will be vice-president of his company. Yet at 31 he was condemned to be a bookkeeper for life.

The foregoing cases were picked at random. Our records are filled with hundreds of the same kind. The names of these men are available to anyone who cares to write for them.

The Institute has 378,497 subscribers. Among these are such nationally known men as William Wrigley, Jr., Charles E. Hines and Ezra Hershey. 48,351 of the Institute subscribers are presidents and business heads, 63,706 are vice presidents.

Send for the facts

Why not find out more about what the Institute can do for you? Why not send for the facts right now? Every year of delay may be costing you thousands of dollars. If you reach a large income at 50, you have a certain number of high salaried years before you. If you reach that same income at 35, you have 15 additional highly paid years. Figure out what that means at $10,000 or $15,000 or $20,000 a year!

An interesting 80 page illustrated booklet called “Forging Ahead in Business” describes the Institute Course and Service in detail. It tells how you can apply to your own career, the principles that have enabled thousands of men to work less and earn more.

This booklet is valuable, yet it costs you nothing. Send for it today.