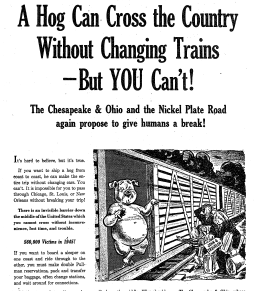 What’s the power concept in copywriting?

Why do you need it?

And how’s it different from a hook?

We’ll get to that in a minute, soldier.

For now, just know the ad you’re looking at and its back story will make it all clear.

Upon approving this print ad, the creative director immediately sent a letter to the client which read:

This is one of the best headlines I have seen in 30 years in this business. If you never run another advertisement run this one.

The client, Robert Young, never wrote this ad, though he often claimed he did.

Who was Robert Young?

His fascinating story goes hand-in-hand with this landmark ad — an ad which literally forced the U.S. railroads to start the first through transcontinental rail service for people… as well as pigs.

This excerpt from an article in The Washington Post paints the picture.

When a man already has 10 million dollars (about $100 million in 2011 cash), a string of railroads and a hand in more than 50 corporations, what is it that impels him to reach for more railroads, more corporations and enough holdings to give 10 less mortals the shakes and high blood pressure?

When the man is Robert Ralph “Railroad” Young, he searches his nimble mind for the reason and comes up with the answer:

I’m just a little boy from Texas trying to bring the public the kind of justice it deserves and give the railroads back to the people.

Indeed, Young conceded several times over the course of his career that the money was incidental. And, though he later had mansions in Newport and Palm Beach, he worked out of a small unlisted office in the Chrysler Building. He claimed he never needed a large office because “I carry the business in my head.”

Young came from a family of country bankers but started out modestly.

Not old enough for the World War I draft, Young got a job cutting smokeless powder at a Du Pont war plant at Carneys Point, NJ for 28 cents an hour.

Before long, he made his way up to the Du Pont treasurer’s office. Several years on, he became adviser to John J. Raskob, then top financial man at Du Pont.

When Young told Raskob he thought the bull market was about to collapse, Raskob sacked him for pessimism. Young, of course, was correct and made his first million shorting the market just before the 1929 crash.

Over the next few years, during the Depression, Young became a broker and parlayed his fortune to over five million. This became his war chest in the battle he was soon to wage over control of the railroads.

Big Thinking and the Power Concept in Copy

Besides the railroad business, Young was fanatical about two things.

He disdained the banking industry, usually referred to as “the goddamn bankers.” He once threatened to make J.P. Morgan a “twentieth-rate bank”  if they locked horns with him again.

His other passion was big thinking.

Young had Donald Trump beaten by a few decades as can be gleaned from these quotes on the power of thinking big.

“Big things” says Young “are not more trying or time consuming than little things. Whenever Mrs. Young (sister of Georgia O’Keeffe) gets at me about getting so involved, I say, ‘Do you want me hanging around the house complaining that the steak is overdone?’ “

“Anyone who has an active mind must keep it engaged,” he said, “and I want mine engaged in important instead of minor things.”

Big thinking is one of the underpinnings of the power concept in copy.

The power concept goes way beyond “the hook.”

They’re what get your prospects to sit up and take notice.

And a good one, tethered to an existing demand, can sell a factory full of products… or almost anything you can imagine.

Here’s an example I’m partial to from an ad I wrote some years ago.

Expensive, technology-laden homes are a proverbial dime a dozen. But how do you differentiate one from the next?

Before I came up with the headline for this ad, the 602-page owner’s manual was just a footnote in a glossy prospectus. But as soon as I saw it, I recognized it’s “hook power.”

The 602-page owner’s manual was the element that got people to take notice and made the home stand out from everything else.

Wish I could report that it sold the property, though it came darn close… but I digress.

The power concept runs much deeper.

It not only seizes the market’s attention but it often changes the way business gets done. In this case, it saved millions of man hours in travel time.

It’s capable of creating whole new products, as well as product categories and is resistant to knock-offs.

“A Hog Can Cross the Country Without Changing Trains — But YOU Can’t!” not only altered the nature of commerce and cross country rail transportation, it forced the railroad industry to make immediate changes to its service, so passengers would no longer be forced to change trains in Chicago, St. Louis or New Orleans.

Before this ad ran, the major railroads staunchly declared that cross country service, without stopping and changing trains through these cities, was impractical.

After “A Hog” was published in Time Magazine and major market newspapers across the country in March of 1946, they reversed themselves and promised through service would be quickly implemented.

Not too shabby for a single space ad.

And the amazing thing about the headline, referred to by Edwin Cox, Creative Director of Kenyon & Eckhardt, as “one of the best headlines I have seen in 30 years in this business,” is it was taken from a margin note of a transcript from a speech that Young had given.

The ad was written by Draper Daniels on his very first day of work.

Daniels’ copy chief, James Egan,  apologetically handed him the transcript and said: “we need another ad for this series in a hurry. Like tonight.”

By the middle of the afternoon, the ad was written, edited and cleared to be set in type.

The ad was mailed to Robert Young that evening along with two other ads which had previously been prepared for a continuation of the Chesapeake & Ohio series.

Young chose the Hog ad and no one knows what became of the other two ads.

As Julian Watkins writes in his excellent, The 100 Greatest Advertisements, “Mr. Young used to say that he had written the ad himself. He didn’t. But he did have the big idea that inspired it and the courage to run it.”

If there’s a power concept lurking in one of your products or services, maybe this will help you tap it.

“A Hog Can Cross the Country Without Changing Trains — But YOU Can’t!”