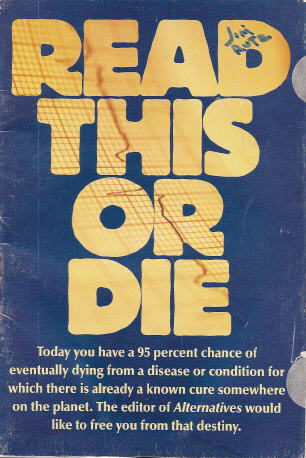 Over a decade ago, one of the great mail order copywriters, Jim Rutz, came up with this zinger of a mail package for the newsletter, Alternatives.

READ THIS OR DIE.

Prior to this piece hitting mailboxes all across the country, the envelope was pushed far and wide in direct mail.

Surely, there was no way left to shock people.

But this piece had even hardened industry insiders raising their eyebrows, when they caught glimpse of it.

It was bold, crass and hit you right in the gut.

But here was Rutz’s point:

“Most of your friends or patients are doomed to die of some disease or disorder that has already been defeated in a medical laboratory somewhere around the world.

In the most unsung victory of the modern era, foreign doctors and researchers have stopped or reversed virtually every fatal condition that has ever struck fear in your heart.”

Rutz made a case for everything from arthritis to diabetes… and skin cancer to ageing… being licked in a lab somewhere.

And most importantly, he froze readers’ attention with a headline that most writers wouldn’t have the guts to try.

But think about it.

That’s the power you can pack in a headline, if you do your homework and aren’t afraid to take off the kid gloves once in a while.

It got you to this page, didn’t it?

It also brought in a boatload of new subscribers.

The take away is: don’t be bashful about trying something crazy once in a while.

It just might be the most profitable thing you do.