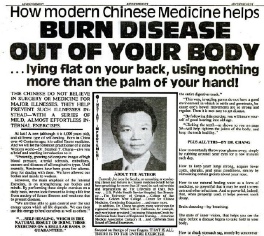 How do you sell $50 million of a single, self-published book?

First, you float an offer.

Then, you wait for the market to to tell you you’ve got a winner.

Once you have that winner, you pull out all the stops and sell it every way you can: direct mail, space, Internet and TV.

That’s exactly what Gene Schwartz did in these pre-Internet days and the result was a $50 million take by the time the offer ran dry.

The book was Dr. Stephen T. Chang’s “The Book of Internal Exercises.”

And the space ad above was condensed from a package that mailed over 100 million times, from the early 1980’s all the way into the 1990’s.

(Click on the image to download the PDF and get a feel for the copy that compelled such astronomical sales.)

BURN DISEASE OUT OF YOUR BODY

…lying flat on your back, using nothing more than the palm of your hand!

The advertising claim sounds over the top. Doesn’t it?

Over the years, many critics alleged Eugene Schwartz’s advertising was full of outrageous claims for bogus products.

If you’re going to really succeed at anything, they’ll be plenty of critics along the way.

So, if avoiding critics and criticism matters, Elbert Hubbard provided a foolproof solution over a hundred years ago.

“To avoid criticism do nothing, say nothing, be nothing.” (Elbert Hubbard)

I don’t know about you but that price is too high for me.

Moreover, Gene demonstrated his high level of ethics throughout his career.

Here’s an excerpt from the now defunct Capitalist Reporter supporting this.

In the case of the advertising for “The Book of Internal Exercises,” Gene totally believed in what he was promoting because he credited Dr. Chang for helping him save the use of his arm after a massive stroke.

What? You haven’t picked up your copy of 100 Money Blueprints? It’s the missing key that skyrockets the potency of the world’s most stolen advertising book.