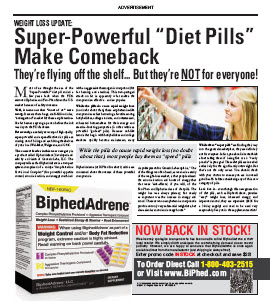 The ad for the “super-powerful” diet pill, BiphedAdrene, from Generix Labs and sold at www.biphedadrene.com has appeared in full page ads in The National Enquirer, The Globe and Parade.

It’s touted as a two-pronged fat attack and weight loss system consisting of of “a unique Amphetamine Provisional Complex for powerful appetite control, mood-elevation, and energy,” as well as  “an aggressive thermogenic compound for fat burning and stamina.”

The strength of BiphedAdrene hearkens back to  Ephedra and Fen-Phen and it’s mentioned in the first paragraph of the ad.

This diet pill is also positioned as an energy booster and mood elevator. The price point is not light at $135 for a 30 day supply.