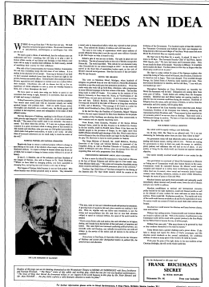 Some of my favorite DR ads (don’t hound me that there’s no coupon here) are arcane, long copy book ads.

2,000 plus word ads like this, Frank Buchman’s story as told by Peter Howard, are fodder for plenty of contemporary topics such as the crisis in the European Union or the moral decay in… pick your country.

WHERE do we go from here? We have lost our way. We lack the power to lead or the grace to follow. We are anti-Communist or anti-American, anti-European or anti-Empire — but what are we for?

We need a goal, a theme of nationhood that the ordinary man can understand and love: something that will help us to play a part in human affairs worthy of our history and heritage, so that Britons once more will be ready to sacrifice their selfishness for their country, instead of sacrificing their country for their selfishness.

Men talk of the Commonwealth, the Common Market, Communism. We will face everything except the real cause of our malaise. It is a decline, in the character of our people. From top to bottom of our land we have accepted standards lower than those we know are right in our private, business and public affairs. Society leaders who accept perversion, divorce, agnosticism and indulgence as normal soon see a nation follow their example. Churchmen who call sin disease but fail to live an experience of Christ adequate to cure it, soon see worship become a form, not a force throughout the land.

We have spent so much time using our brains to prove to our conscience- that wrong is right, because it is convenient, that our sense of right and wrong is deadened.

Voting Conservative, Labour or Liberal will never cure this complaint. You cannot meet moral need with an economic remedy nor satisfy spiritual hunger with political deals. Until we tackle human nature thoroughly and drastically on a colossal scale, the British people will continue to feel emptiness, unrest and unhappiness in the midst of their affluent society.

The late Marquess of Salisbury, speaking in the House of Lords in 1936, gave the right diagnosis — and the right cure — of our current malaise. He said, “The cause of the world’s state is not economic: the cause is moral. It is there where the evil lies. If I may use a phrase which is common in a great movement which is taking place at this moment in this country and elsewhere, what you want are God-guided personalities, which make God-guided nationalities, to make a new world. All other ideas of economic adjustment are too small really to touch the centre of the evil.”

It was C. J. Hambro, one of the architects and later President of the League of Nations, who said in Geneva to Dr. Frank Buchman, “Where we have failed in changing politics, you have succeeded in changing lives, and giving men and women a new way of living.”

The League of Nations failed because it was not God-arched. Men whose families were divided preached unity to nations. They demanded a moral code in international affairs which they rejected in their private lives. They enlisted the idealism of millions and sold them short.

The same is true today of organisations which spend millions of pounds efficiently doing what is not the way and cause millions of people to pin their hopes on what is bound to fail.

Britain’s guts in war are not in doubt. Our guts in peace are not in evidence. The tide of tyranny broke on the rock of British courage after France fell. The world marvelled. Who will do for our character today what Churchill did for our armed strength in 1940? So the world will marvel at the flood tide of materialism broken again on the rock of Britain’s renewed moral greatness. Here lies the secret of the new leadership the age demands.

This week on Mackinac Island, Michigan, where hundreds of delegates are gathered from all over the world at a Moral Re-Armament Assembly, a new film studio goes into permanent production. From this studio week after week will go forth films, videotapes, radio programmes in many different languages to the four corners of the earth. The first film being made is called El Condor. It is written by the students of San Marcos University in Peru where Mr. Nixon, as Vice-President of the United States, was spat upon and stoned. It gives an answer to corruption and hate. Eudocio Ravines, trained in Communism by Mao Tse-tung and entrusted by the rulers of Moscow to bring their revolution to Chile, said at Mackinac, “The message of t as a play has already saved bloodshed in Peru, Chile and North East Brazil.”

In the last few days the President of Guatemala, Miguel Ydigoras Fuentes has sent urgent demands for films from Mackinac for his people.

Leaders of the Caribbean are showing these films commercially in their countries and are urgently requesting more.

From Kenya, Jomo Kenyatta, President of the Kenya African National Union, asked for the film Freedom to be dubbed into Swahili. In the last months, under its Swahili name Uhuru, it has been seen by 400,000 people in the provinces of Kenya. In two nights more than 60,000 Africans attended paid showings of this film. Word comes that as soon as Kenya is free, the African leaders are eager for the film version of the play The Hurricane to have its world premiere in Nairobi.

The Prime Minister of Burundi, Mr. Andre Muhirwa, President Kasavubu of the Congo and General Mobutu, in command of the Congolese Army, as well as President Tshombe of Katanga, political leaders of Ethiopia and other African rulers are among those who are requesting films and radio programmes from Mackinac.

In Asia a centre for Moral Re-Armament is being built at Odawara at the foot of Mount Fujiyama and will be open in a few weeks’ time.

Prime Minister Ikeda says, “This centre will strengthen friendship among Asian countries and help to establish permanent peace in this continent.”

President Ngo Dinh Diem of Viet-Nam arranged for the filming of the Japanese play The Tiger which recently visited his country at the invitation of the Government. Two hundred copies of that film made by the Vietnamese Government and dubbed into their own language are being shown in the towns and villages of Viet-Nam. Word comes that more Moral Re-Armament films are urgently needed.

The Tiger was in Viet-Nam for a month. It played 26 times in 7 towns in 30 days. The Provincial Security Chief of Qui-Nhon, Jguyen Dinh Quynh, said, “We have had many anti-Communist plays. They do not touch the heart of the people. Your play is different. It is realistic and it reaches the heart. You have done in a few days in Saigon what the whole army could not do in years.”

The Tiger is a play written by some of the Japanese students who caused the rioting in Tokyo which led General, then President, Eisenhower to cancel his visit to Japan. These men changed. They travelled through Europe, the United States of America, Latin America and Asia. They met General Eisenhower in America, and he told them, “I am with you one hundred per cent.”

Throughout September at Caux, Switzerland, an Assembly for Moral Re-Armament will be held. Delegations are coming there from every part of Africa. Youth leaders are coming from the European countries. Industrial men and labour leaders are meeting together to plan for the new economic conditions facing the continent. Hundreds of delegates from the mines, mills and docks of Britain, as well as from the universities and civic centres, will be going there.

At the session of the Caux Assembly which ended this week, Robert Carmichael, President of the European Jute Industry, addressing 490 representatives from 29 nations, said, “There cannot be clear negotiations on economic points if we are not clear on ideology. There must come a fundamental change in motives. We learn at Caux how ideology affects industry throughout the world.”

The whole world is eagerly waiting a new leadership.

On 28 July, 1962, The Times in an editorial said, “It is no use clamouring for leadership unless there are clear ideas where to lead.”

No government today will lead effectively unless it learns the art of dealing with human nature, starting with its own. Nations are waiting for governments to show in their own ranks the answer to ambition, greed, jealousy and selfishness that will lead us out of chaos.  A new quality of living for the whole world can become our supreme national objective.

One nation morally re-armed would pattern a new society for the world.

One government as convinced of Moral Re-Armament as Moscow or Peking are of Communism would alter human history in five years.

Communism would be outmoded because the Marxist world would recognise and respond to a society more revolutionary than their own where God was in control, where social and economic justice became normal, where families, industries, nations, at peace within themselves, brought the secret of peace to East and West.

Absolute honesty and purity lived personally and nationally would immediately reduce taxation and juvenile crime, lower the toll of disease and give new health to millions.

Absolute unselfishness as national and international economic policy backed by the right legislation, would end bloated profits as well as the demand of some workers for more and more in return for less and less. Prices would fall. Production would rise. The wealth and work of the world would become as available to all and for the exploitation of none. No nation would rest content if it had too much while other nations went hungry.

Absolute love would answer the divisions and hates between classes, races and nations.

Without that uniting answer, Commonwealth and Common Market are bound to splinter and fall with it the passion of godlessness in the Communist world will be cured with a greater passion in the Free World for the Will of God to become the way of all the people.

William Penn once said, “Men must choose to be governed by God or they condemn themselves to be ruled by tyrants.”

Today Britain faces a greater challenge and a graver choice. If she fails to change and rejects the choice of God’s sovereignty and His absolute moral standards as her normal nationhood, she condemns millions of others in many parts of the world to be ruled by tyrants.

If she pays the price of the right choice in the true tradition of her Christian birthright, she will set the whole world free.

“THE REAL NEED OF THE DAY IS therefore moral and spiritual re-armament.

A growing body of people in this and other countries are making it their aim. Were we, together with our fellow men everywhere, to put the energy and resourcefulness into this task that we now find ourselves obliged to spend on national defence, the peace of the world would be assured.

“GOD S LIVING SPIRIT calls each nation, like each individual, to its highest destiny, and breaks down the barriers of fear and reed, of suspicion and hatred. This same Spirit can transcend conflicting political systems, can reconcile order and freedom, can rekindle true patriotism, can unite all citizens in the service of the nation and all nations in the service of mankind.”

From a letter to THE TIMES, 10 September 1938, from the late Marquess of Salisbury and sixteen other distinguished leaders in political life, the armed services and education

Readers of this page can see its thinking dramatized at the Westminster Theatre in MUSIC AT MIDNIGHT with Nora Swinburne and Norman Wooland. “The Times” wrote of this subtle and exciting play, which has run for over one hundred performances:

“The kind of thing that Moral Re-armament wishes to see happen in the world happens in this play by Mr. Peter Howard and Mr. Alan Thornhill… the play fairly exploits a valid dramatic situation to make its point.”