Has reality finally caught up with financial direct mail?

Here’s a sampling of the covers from the latest promotions going through the mail.

* The End of America from Stansberry and Associates

* American Apocalypse from Martin Weiss and

* Checkmate, America! from the Sovereign Society.

Gloom and doom has been the zeitgeist of financial direct mail for quite a while for the simple reason that it’s nearly impossible to get someone’s attention in this market without the two key drivers of fear and greed.

But with the fiasco (an apt Italian word for failure) now unfolding in Europe, nothing seems so far fetched these days in the financial markets — both here and in Europe.

As I was reading the piece, it struck me that it was little different from the average financial direct mail promo but for the fact that it didn’t sell anything.

Too bad because it’s classic direct mail ad copy — facts plus imagination plus taking a firm position… even if it turns out to be wrong.

And you can glean as much or more from the guts and raw emotions in the comments as you can from Sandbrook’s story.

Who are the Crypto-Nazis and what in the world do they have to do with copywriting?

It started with a conversation some years ago with a marketing colleague who proclaimed: “my customers are crypto-Nazis.”

“They watch Fox news, read Newsmax, and are influenced by the loudest voices with lightest intellects.”

Intrigued with this topic, I said, “tell me more.”

Though I’m a political and economic centrist and reluctant to cast myself as a member of a group, marketing-wise, I’m fascinated with the behavior of extremes and extremists.

Get someone like this going for ten minutes and you can pick up a lifetime’s worth of education to ply in a relevant market.

Back in my New York days, my next door neighbor was a French communist film director who could rail for hours about his pet causes. I remember him most for his habit of rolling a bowling ball down the long hallway of his railroad apartment after a few glasses of his beloved bordeaux.

END_OF_DOCUMENT_TOKEN_TO_BE_REPLACED 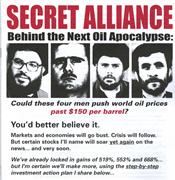 “Couldn’t happen to a nicer guy,” the sarcastic little New Yorker in my head instantly uttered, on hearing the news.

Since I lived in Lower Manhattan at the time of 9/11, I like most New Yorkers, recall far more than the TV images the rest of the world watched for weeks on end.

And gratefully, though I didn’t lose any family or friends, I know several people that did.

One of the things I recall most as a New Yorker in the aftermath of 9/11, was the acrid smell of burning jet fuel and debris that wafted several miles uptown… all the way to 14th Street, near where I lived.

END_OF_DOCUMENT_TOKEN_TO_BE_REPLACED 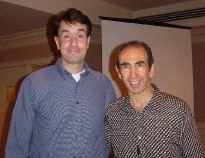 One evening, eight years ago, I was sitting in my high-rise apartment across the Hudson River from New York City.

I was working on my laptop when my wife broke the silence.

“Hey, have you heard of Joe Sugarman?”

“He’s giving a workshop on copywriting at the Learning Annex.”

“Heard of him!?” I excitedly fired back.

After living in New York for many years I cultivated a proud indifference on seeing film actors and other luminaries. I was a true New Yorker.

But it’s fair to say Joe Sugarman was my idol back then… and my wife still rides me about the goofy smile on my face that night.

“Have I head of Joe Sugarman?” END_OF_DOCUMENT_TOKEN_TO_BE_REPLACED

Posted this with the permission of my friend Bill in Chicago who sent this to me a few months ago. Bill’s a sales and marketing genius. Last year, he outsold everyone else in his home office combined.

Here’s his recap of this strip mall merchant’s success story — quick and concise the way all effective marketing and sales should be.

Thought you would appreciate hearing this success story.

Tonight I took my daughter to get her hair cut and colored.

Went to a new place, and ended up talking with the owner for 2-and-a-half hours about business, marketing and life in general.

He opened his salon 17 weeks ago with zero clients.