A couple of months ago, I began exchanging messages with a subscriber.

I’d post my usual fare, like a David Ogilvy or Gene Schwartz full page ad and this fellow began regaling me with tales of working closely with both of these legends.

Little did I know, he’s a legend himself.

The man is Drayton Bird and thanks to his recent collaboration and interview with Clayton Makepeace, many online experts are gearing up for Drayton’s Bird’s flight school.

He has a boatload of delectable DM goodies for the taking. Do yourself a favor and get on his list at: www.draytonbird.com 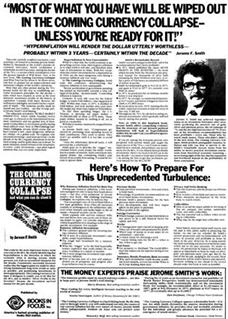 Hits you right between the eyes, doesn’t it?

It seems like every few years, an economist comes out with a book predicting
the mother of all depressions.

When nothing remotely close to the dark scenario happens — and often just
the opposite — the mere mention of the author’s name triggers a laugh track.

And like the boy who cried Y2K wolf, his credibility is permanently maimed.

Maybe there’s something to it this time.

Though the ad above was written in 1980, it paints a fundamentally accurate
picture of the economic mess in the United States in 2007.

Our currency is at a 15 year low against a basket of six currencies.

Yes, the Dow is at an all time high thanks largely to the recent (and
reckless) interest rate cut but it wouldn’t take much to unhinge the U.S
economy.

Hopefully, we won’t be selling special reports on “How to Start
Your Own Street Corner Apple Selling Empire.” But if a 2 billion pound run by
panicked depositors can happen at a British bank in the same month as America’s
largest mortgage lender was inches away from going under, then anything is
possible.

How marketers can profit from the U.S. Currency Collapse

For marketers in the United States.

When could be a better time? The products we keep selling at the same price
point in U.S dollars have gotten a heck of a lot cheaper in pounds, Euros and
Canadian dollars. Sure, these products are paper and ink or bits and bytes with
far higher margins than leather handbags. But nine out of ten marketers pay
almost no attention to pricing strategies even in tranquil economic cycles.

Online, pay-per-click advertising makes it ridiculously easy to price test.
You can set up an ad to run in the UK only and split the traffic between two
pages with different prices. Since the pound is worth so much more than our
dollar, there is a lot of leeway for testing.

American marketers need to understand that a $500 dollar sale of an
information product only amounts to a few rounds at the pub with some friends.
It’s just a couple of quid.

More importantly, marketers need to get over the anxiety of a customer
flagging them for buying a product at a higher price and then seeing the same
product at a lower price. In the rare event when this does come up, the remedy
is simple: explain that you are price testing, refund the difference and add a
premium or bonus to keep them content.

There’s never been a better time to be an entrepreneur.

When mass layoffs and downsizing are shackling the wallets of everyone
around, an innovative info marketer can always count on waking up to new orders
from Sydney, Singapore and Stockholm.

For marketers outside the United States

If you can identify successful US products with static pricing, instead of
becoming an affiliate, buy a lot of ten or twenty units at a steeply reduced
price. This takes the sting off shipping and boosts your margin. You’ve now
greased the slide for customers in your home country since shipping is domestic
and drastically lower.

Set up some AdWords campaigns to run exclusively in your country and bump up
the product price. The weak dollar now becomes your ally and you may realize
profits of 50% or more beyond your investment.

Several years ago, I took my last thousand dollars and did exactly this (with
a British publisher)…getting a 500% return in sixty days. 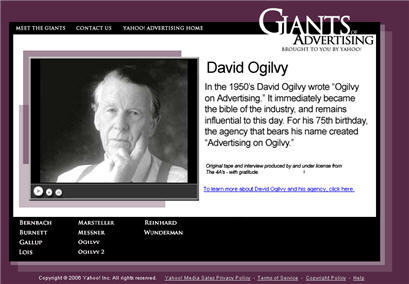 I oughta get some more music on my Ipod but that hardly happens.

That’s because right now, an Ipod loaded with business and marketing seminars, lectures and talks is as essential to me as air, food and water. Running on a treadmill for an hour would be out of the question without it.

Here’s a site called the CEO Clubs. I was pleasantly astonished when I first came upon this site a few years ago. There are many superb MP3s on the site free for download.

A WARNING though. Several of the audios are tin-can-and-string quality. Joe Sugarman’s, unfortunately is one of them.

There are also some terrific talks by heavyweight CEOs like Ted Turner, W. Clement Stone, Bill Bartmann and Dan Pena.

Strangely, I haven’t heard Bill Bartmann’s address yet but just loaded it on my Ipod. He’s the ultimate millionaire to bankrupt to millionaire three times over story. Later, Bartmann took a $13 thousand loan and turned his kitchen table business into a $3.5 billion, 3900 person organization.

Dan Pena has been one of my most steadfast remote mentors. I haven’t met him yet but exchanged emails a few times with his business partner, Bruce Whipple.

The larger than life Dan Pena was the basis for Michael Douglass’ character, Gordon Gekko, in the movie “Wall Street.” Dan used to stand on the trading desk and shout at the traders with a bullhorn during his tenure at Bear Stearns. The brilliant British copywriter and newsletter publisher, Stuart Goldsmith, penned a memorable salesletter for Dan’s now out of print book, “Your First Hundred Million.”

I have to thank Dan Pena for turning me on to Ted Turner’s talk.

Whether or not you like the “Mouth from the South,” this is an address you have to hear.

Ted glibly tells the roomful of CEOs at the Harvard Club that since they’re middle aged and “already half-dead” they have absolutely nothing to lose by taking risk.

I believe this is also the talk in which Ted tells the story of his father who ate breakfast one morning and then calmly walked into the bathroom and blew his brains out.

Ted says his father left him two things after his death: a billboard company worth $2 million and the notion that he should set goals that transcend his lifetime.

This is one of those life changing ideas that initially sounds irrational and even crazy, yet it’s the philosophy Ted used to build a multi-billion dollar media company.

So get on over to http://www.ceoclubs.org/main/talks.htm and get some Ipod food.

Most direct marketers sneer at the Neanderthal direct mail approach of mortgage companies here in the States.

And hardly a day goes by we don’t get a refinance offer or line of credit offer in the mail. Their approach has been nothing short of unimaginative, robotic and wasteful…yet highly effective. The lure of cheap money has been a commodity that produced its own demand.

Now, the bubble is bursting but this time the mess is so big, the mortgage companies are collapsing alongside their illiquid customers.

Today, I got a home equity line of credit offer from my mortgage company and I’m seriously thinking about taking them up on it…while it’s still available. Their stock shed another 7% this week and it’s been reported that 1-of-8 of their customers are delinquent or defaulting.

But I won’t be using the line of credit for traditional purposes.

Since I’m already shorting them, I’ll use the line of credit to short ’em some more. They’re already halving our monthly payments so why not give ’em a chance to pay off the whole loan.

Imagine a direct marketing/copywriting seminar from a parallel dimension.

And the rallying cry for this most unique meeting? “Why not the best!?”

If you’ve been to any events in the direct marketing arena, it’d be reasonable to conclude this was a parallel dimensional experience.

Yet it all was very real. END_OF_DOCUMENT_TOKEN_TO_BE_REPLACED