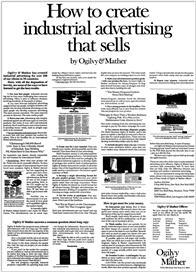 The debate about the effectiveness of long copy verses short copy seems like it could rage on for another century.

In part, it’s fueled by those with a vested interest in promoting long copy. They refuse to admit that sometimes when you have a widget for sale, the best approach is to write a three word ad: “widget for sale.”

And if you market online, you’ll notice the effectiveness of the long scrolling sales letter has taken a nose dive. All you have to do is look at your web metrics and you’ll notice visitors fleeing these pages in droves.

So what’s the answer?

Most important is creating irresistible, low cost front end products or self-liquidating offers that allow you to capture the postal address of your prospects. Once you have this, no spam filter can block your message and your long form sales letter has infinitely more power when it’s in your prospects’ hands verses the fleeting moments it’s on their screens.

As you know by now, the answer to the long copy verses short question is it depends on your market, offer, product and list. And testing is the only way to know.

Here, in my view, is the best and most succinct explanation about the merits of long copy written 33 years ago by David Ogilvy.

From: “How To Create Industrial Advertising That Sells”

Ogilvy & Mather has prepared many industrial advertisements with very long copy. Yet readership research shows that the vast majority of the readers of any advertisement never get beyond the headline.

Since so few people read the copy at all why does Ogilvy & Mather recommend long copy so often?

The answer is that those relatively few people who read the copy are prospects for your product or your service.

If you aren’t in the market for a product you are unlikely to read an advertisement for it, no matter how long or short the copy. (Most readers of the Wall Street Journal have little interest in industrial advertising or Ogilvy & Mather. Chances are they haven’t read this far.)

You might be able to sell a candy bar with very short copy but you could never make a case for buying a Cessna Citation in a handful of words.

Here is a large version of: How to Create Industrial Advertising That Sells. 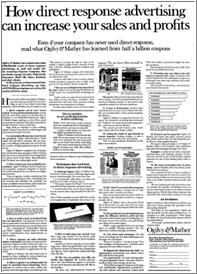 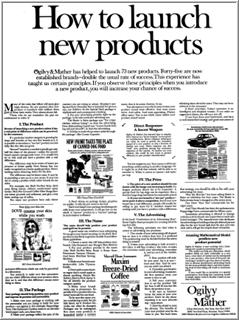 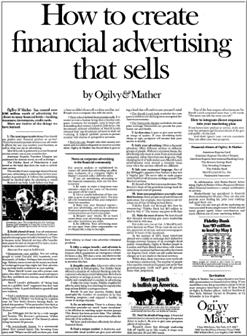 Some advertising claims are so hard to swallow that their headlines – instead of being an “ad for the ad” – just give readers an excuse to bail out the moment after they’re read.

We’re not talking about unschooled business owners, where “advertiser B” ups “advertiser A’s” promise of losing 12 pounds in a weekend instead of 9.

No, what we’re referring to is the average reader’s reaction to a claim like: ending a lifetime of pain in an afternoon. Or ordering shellfish by mail order. Claims which on their face are far easier to dismiss than believe.

Try to persuade someone with a standard “benefit headline” that there’s a simple $19 shoe insert that’ll vanquish years of excruciating foot or ankle pain and you’ll chase prospects away faster than a firework does a flock of pigeons.

It doesn’t matter how accurate the claim. It’s what your prospects believe that counts.

Take the position of your prospect. Become the doubting Thomas your prospect is. There’s no better place to attack their objection than by raising it yourself in the headline.

Yes, it takes some guts.

The tendency is to make the big promise, tell about all the great benefits and overcome the awkward objection in the fine print. But a lot of prospects flee before you get a chance.

Here are a few examples:

“They Thought I Was Crazy to Ship Live Maine Lobsters As Far As 1,800 Miles from the Ocean” immediately addresses the objection to lobsters for sale by mail order which someone would still have in 2007 — 50 years later.

But the ad writer goes on to raise every single objection you could have for not buying Maine lobsters by mail and overcomes them all.

He uses a folksy me-to-you style of copy, tells you that you can actually steam the lobsters in the container they’re shipped in without getting your hands dirty, and offers a full money back guarantee.

Of course, he explains the re-icing process that happens when the lobsters are shipped by 1st Class Railway Express. He also cleverly uses specificity by prominently mentioning his 18,685 delighted customers. And then he gives you a choice of which package to order. There’s no “yes” or “no” option. It’s take your pick of four seafood feasts.

Maxwell Sackheim may have written it over 80 years ago, yet it continues to wield tremendous power to this day. No direct response ad ever came close to its four decade plus staying power.

Even the Olympian copywriter, Gary Bencivenga, pulled this headline out of his file in the 1995 ad: “Do You Make These Mistakes in Job Interviews?”

Exactly what accounts for its stunning success?

By itself, the word “these” is rather harmless looking. Paired with the word “mistakes” it creates a vortex that sucks the reader into the body copy.

You’ve got to find out what these mistakes are. Since the advertiser knows which specific mistakes, he must know the answers as well. And if he’s got the answers, then he must be an authority.

The word “these” in this veteran ad is a textbook example of a headline proof mechanism. Claims are a dime a dozen but linking powerful proof to a claim in your headline magnifies the pulling power of your ad exponentially.

All this subtle yet potent psychology begins to work on the reader before her eyes read the first word of body copy.

The combination of authority and curiosity work forcefully together. And almost any advertiser can harness this power. Some examples:

You get the idea.

Of course, there are limitations here.

Don’t expect to beat an A-list writer’s control-package headline by swiping, no matter how successful the original. Nevertheless, this strategy can be tremendously successful for 95% of everyday advertisers. You can also try this when a headline isn’t performing or when you want to breathe new life into an old and tired ad.

Notice the great subheads Max Sackheim uses, the powerful benefits you’ll get from taking the course, and the promise of almost instant results. Everything works together like an ensemble as all great ads do.

It’s interesting to note that Sackheim took many earlier swings at the plate for this client with only ordinary results. Once he got the right headline, no ad writer on the planet could conquer it for an astonishing four decades.

Here’s and enlarged version of “Do You Make These Mistakes In English?”

One of the most successful ads in the investment markets.

Here is a large image of: “Why Some People Almost Always Make Money In The Stock Market.”