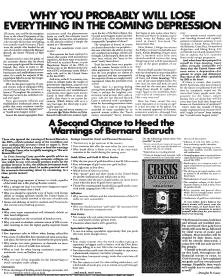 The ad was for Douglas R. Casey’s book, Crisis Investing, which sat on the New York Times Best Seller List for 29 weeks.

Now, discounting the fact Casey predicted a depression for 1983 which would make the 1930s seem like a “technical correction,” the author built a lucrative career in newsletter publishing and speaking, while being an accurate prognosticator much of the time. He certainly was spot on in 1980 when he warned: “Why a savings and loan is an even more dangerous repository for your money than a bank.”

Casey’s been called all kinds of things over the years: a gold bug, a perma-bear… and worse.

His book, The International Man: The Complete Guidebook to the World’s Last Frontiers. For Freedom Seekers, Investors, Adventurers, Speculators, and Expatriates, influenced my thinking and led me to become an Irish Citizen… one of the few First World countries with an economy in even worse shape than the U.S. 🙂

Interestingly, the out-of-print book, The International Man, is selling on Amazon for $1,000.

When reading this 31-year-old ad, it’s hard to ignore the economic similarities with today.

In fact, you could probably strip out the 1980’s buzz words and replace them with ones from our recent turmoils — sub-prime mortgages, liquidity crisis, real estate collapse, etc. — and have an immensely profitable ad.

There’s also something about this formula of apocalyptic prediction paired with visionary solutions which should be as instructive to copywriters and direct marketers as it is attractive to doomsday cults.

As marketers, people buy our products and services not based on how logical we make our arguments, but on how well we push emotional hot buttons.

This ad not only provides a history lesson and the three-step scenario that precedes a collapse but fans the emotional fires.

Around this time, newsletter publishers like Howard Ruff and Gary North capitalized on the doomsday trend by advocating storage of dehydrated food, bottled water and gold coins in the event of civil breakdown and collapse of the financial system.

This opened the door to copywriters and marketing consultants like Clayton Makepeace and Jay Abraham, who made fortunes for themselves and their gold bug buddies and clients — not primarily through great copy, which they wrote — but by positioning themselves on a path with insatiable demand for gold, gold stocks and other precious metals. (Jay Abraham wrote an ad in the New York Times in 1984 with the headline: “Cayman Island 24-Hour Gold and Silver Hotline: The Most Expensive Phone Number in the World.”

The lesson is twofold.

Here is a transcription of the ad. (If you’d like to see it in its original layout, click on the thumbnail above.)

“Why You Will Probably Lose Everything
In The Coming Depression”

Of course, you could be the exception. Even in the Great Depression of the 1930s, there were a handful of people who not only did not lose everything, but actually made fortunes. These were the people who heeded the advice of economic realists like Bernard Baruch, the famed “Wizard of Wall Street.”

Baruch tried to warn the public of the economic disaster that lay ahead, but most people ignored his warnings. Instead, they chose to listen to the Pollyanna assurances of government bureaucrats and establishment economists. As a result, the majority of the population failed to escape the ravages of the Great Depression.

Why do the great majority of men and women insist on clinging to folly, notwithstanding the lessons of history? Throughout the centuries, a three-step scenario has unfolded over and over again.

Second, the masses regurgitate these assurances until the phenomenon feeds on itself, the ultimate result being that anyone who calls attention to the obvious realities is simply dismissed as a “doomsayer.”

This scenario has been replayed in nation after nation with monotonous repetition. All three steps were clearly followed in ancient Rome, in pre-Napoleonic France in the 1790s, in Russia prior to the Bolshevik revolution in 1917, in Germany under Hitler’s early rule, and in the United States in the late 1920s.

And now, as the US economy continues to collapse under the weight of government regulation, taxation, and ever-accelerating welfare-state spending, bureaucrats and establishment economists once again seem almost frantic in their efforts to assure the public that there is no reason for concern. Which history tells us is a very bad sign; the third step is practically upon us!

In every age, in every country, intellectuals like Walter Heller and John Kenneth Galbraith have insisted, right up to the day of the final collapse, that it could never happen today and that all those who claim otherwise are irresponsible “prophets of doom.”

The “prophets of doom,” of course, are almost always the true prophets – and men who have the ability to properly combine knowledge, realism, and foresight. Unfortunately, these are the very men whom the “man on the streets” rarely hears about.

Truth has never been very popular with the masses, because truth is so often unpleasant. So it’s not surprising that the true prophets are almost always ignored, and that consequently the majority of men are caught totally unprepared when the inevitable crisis arrives.

Today there is a growing feeling among those prophets that Douglas R. Casey is perhaps the brightest new economic mind to enter their ranks in years. Like the late Bernard Baruch, Casey is endowed with the prodigious talent for forecasting economic events.

Never has a man so young been accorded so many accolades by the respected names within the “hard-money movement.” Savvy investors first began to take notice when Harry Brown and Harry D. Schultz, respectively, wrote the Preface and Foreword to Casey’s first book, The International Man.

Now, Robert J. Ringer has written the preface to Casey’s remarkable new book, Crisis Investing. Ringer states that “100 years from now, should mankind survive that long, Doug Casey may well be remembered as one of the great prophets of our time.”

Howard Ruff, another doomsayer who has developed an annoying habit of being right most of the time, says of Casey and Crisis Investing: “this is one of the most helpful books I’ve ever read. Its tone and power are cool, clear, and for the most part dead-on. Doug Casey, should by rights, be a major figure in the sometimes checkered world of investment advisors. He’s a very wise man.”

How has Casey earned this awesome reputation at so young an age? It is due not only to his genius, but to his unusual approach to domestic economic analysis – through first hand experience on the international scene.

Casey spends several months each year traveling abroad and regularly sponsors investment seminars in such locations as South Africa, Rhodesia, the Bahamas, Costa Rica, Switzerland, Argentina, and Hong Kong. His worldwide travels and contacts allow him to analyze the U.S. economy from a truly unique perspective.

And what does that perspective reveal? In crisis investing, Casey offers virtually irrefutable evidence that the United States will soon enter a depression — far greater in scope and dimension than that of the 1930s — probably by 1983 at the latest.

If Casey is correct, then prudent, thrifty Americans who have prepared for the future in traditional ways will soon be completely wiped out. He warns that “many people never plan properly for the future, simply because they are afraid they will discover they have built their hopes and dreams on foundations of quick sand.”

Don’t make the mistake of being caught unprepared just because those who “ought to know” keep insisting that “it could never happen today.”

In Crisis Investing, Casey provides specific advice on how to prepare for the coming economic collapse, advice which he says will actually produce profits for the prudent investor. In this, the ultimate investment book for the troubled years ahead, he makes practical use of his economic forecasting talent by examining, in a clear, precise manner:

If you either don’t believe that the United States is on the verge of a total economic collapse, or don’t know how to take proper measures to protect yourself when it occurs, you need to read Crisis Investing.

Do the following events seem “impossible” to you?

If you either don’t believe the above events will occur over the next few years, or don’t know how to take proper measures to protect yourself when they do, you need to read Crisis Investing.”

The final waters, both here and abroad, are troubled now. I am convinced that gale force winds will soon hit us, followed by tidal waves of panic and collapse. Most investors will be stunned by their losses; many will be utterly destroyed; a canny few will not only survive, but prosper. “

“I intend to be safe and secure, on dry land, throughout the financial storms to come. In crisis investing, I have explained my goals and my own personal strategies. Hopefully, these words will enable you to travel safely as well.” Douglas R. Casey.