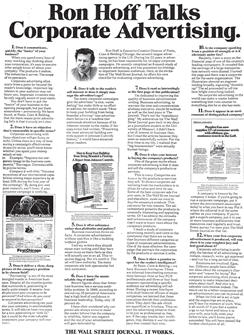 Corporate copywriters will tell you direct response copywriters are nothing more than peddlers of get rich quick schemes, enlargement pills, and slimming devices.

Who’s right? (I like to keep a foot in both camps.)

In the timeless words of the late Rodney King, “Can we all get along?”

Since the demise of Ogilvy & Mather Direct, corporate advertising ain’t what it used to be.

But that doesn’t mean there aren’t plenty of great examples of corporate direct response advertising.

This ad hails from the late Ron Hoff, who was executive creative director at Ogilvy & Mather in New York, and Foote, Cone & Belding in Chicago.

Ron Hoff Talks Corporate Advertising was part of a series from the brilliant campaign: “The Wall Street Journal. It Works.”

Ken Roman, former CEO of Ogivly & Mather, is a fan of this campaign as well. I’ll have several more of these gems soon.

If you want to learn how to broadcast your expertise out to the broadest masses, this one is a keeper.

I’m partial to these two concepts:

…they [copywriters] should never start writing until they have seven times as many facts as they will actually use in an ad.

I have often wondered why corporate ads always strive to make the reader believe that the company is infallible. Admit one negative and the rest of your advertisement will gain believability.

1. Does it communicate, quickly, the “basics” of your business?

When you spend every hour of every working day thinking about your corporation, it’s easy to assume other people know all about your company. The products it makes. The industries it serves. The scope of its operation.
Corporate advertising often starts from a point far beyond the reader’s knowledge. Important legislators in your audience may not know you. Important investors may be only vaguely aware of your name.

You don’t have to put the “basics” of your business in the opening paragraph, but put them somewhere — prominently. We have found, at Foote, Cone & Belding, that the main reason print advertising fails is that it simply isn’t clear.

2. Does it have an objective that is measurable in specific terms?

Corporate advertising with fuzzy objectives will get fuzzy results. Unless there is a way of measuring a campaign’s effectiveness in specific terms, you’ll never know whether you spent your money wisely or not.

Example: “Improve our corporate image in the business community.” Too vague. Unmeasurable in precise terms.

Compare it with this: “Increase awareness of our international capabilities among major exporters by at least 20% during the first year of the campaign.” By doing pre- and post-research, you’ll  know if your corporate campaign is working.

3.Does it deliver a clear, sharp picture of the company’s position in its chosen field?

“Positioning” is one of the most mangled words in American business. Despite all the mumbo-jumbo that surrounds it, positioning is really quite simple. It means: how do you want your company to be perceived? And whom do you want to respond to that perception?

Corporate advertising can position your company in unmistakable terms. It will take at least two years for a new positioning to “sink in” but it could be the most valuable investment your company will ever make.

4. Does it talk to the reader’s self-interest or does it simply massage the advertiser’s ego?

Too many corporate campaigns give the advertiser “a nice, warm feeling” but make little or no effort to address the reader’s needs.  “How to keep your building from being branded a firetrap” (see advertisement below) is a headline that commands attention because of its inherent interest to the reader: If the copywriter had written, “Presenting the most advanced building controls system in Johnson Controls history,” it would have attracted fewer readers.

5. Does it offer substance rather than platitudes and puffery?

Business executives thrive on facts. A corporate advertisement without specifics is like a building without girders.

I tell my writers they should never start writing until they have seven times as many facts as they will actually use in an ad. This requires digging. But it’s worth it. The ad will have authority. Too many corporate ads look spectacular but lack substance.

6. Does it have the unmistakable ring of truth?

Recent figures show that American business has a serious credibility problem. In 1966, according to one survey, 55 percent of Americans had a high level of confidence in business leadership. Today, only 16 percent do.

I have often wondered why corporate ads always strive to make the reader believe that the company is infallible. Admit one negative and the rest of your advertisement will gain believability.

7. Does it read as interestingly as the first page of this publication?

I’m dedicated to improving the quality of business advertisement writing. Business advertising, to warrant the time and concentration of a busy executive, should be written as well as the lead piece in The Journal. That’s not the “mandatory plug.” My admiration for The Wall Street Journal  goes  back to my days as a journalism student at the University of Missouri. I didn’t have a lot of interest in business then, but I read the articles because they were so masterfully written. For the first time in my life, I realized that “big businessmen” were actually human beings.

8. Does it whet your interest in buying the company’s products?

One of the great myths about corporate advertising is that it does not sell the company’s products or services.

This is crazy. Companies are known by the products or services they sell. To divorce corporate advertising from the marketplace is to dilute its value and limit its use. Some of the best corporate ads I’ve ever seen, in The Wall Street Journal and elsewhere, made me want to buy the company’s products. This can occur for two reasons. The advertisement presents the products in unusually interesting and appealing terms. Or I so admire the attitudes and achievements of the company that I want to know more about the company’s products.

I made a study of corporate advertising recently and came to the conclusion that there are no less than fourteen different categories or types of corporate advertisements. One of the most effective: the campaign that portrays the corporation by the products or services it sells.

9. Does it show a genuine respect for the reader’s intelligence?

At Foote, Cone & Belding — we have Business Interlogues. These are informal freewheeling conversations between three or four FCB professionals and three or four businessmen representing a specific audience our advertising will address. During a recent Interlogue with chief financial officers of major companies, we learned that these executives cherish their professionalism. They don’t like ads which are superficial or frivolous. They expect the advertising aimed at them to be just as professional as they are. If the copy insults their intelligence, they dismiss it and the company that wasted their time.

10. Is the company speaking from a position of strength or is it obviously under fire?

Recently, I saw a story on the financial page of one of the country’s leading newspapers. It revealed that the earnings of a large transportation network were dismal. I turned the page and there was a corporate ad for the same organization. The illustration showed an engineer smiling broadly, signaling “thumb’s up.” The ad proceeded to tell me how bright everything looked.

No corporate advertising in the world can make a reader believe something that runs counter to everything else he or she has seen.

11. Does it appear in an environment of distinguished company?

A company is known by the company it keeps. If you’re going to run a corporate campaign, put it where the environment encourages belief in what you have to say. Put it where the editorial is of the same caliber as your company. If you’ve got a superb company, put it in one or more business publications that executives read regularly and trust. Every survey I’ve seen puts The Wall Street Journal on that list.

12. When your first corporate advertisement is produced, will you show it to your toughest jury and feel good about it?

Corporate advertising is probably the hardest of all advertising to initiate, research, write, get approved — and run for a long period of time.

Emotions are involved. Egos, too. Different people have different ideas about the company’s character and “reason for being.”  But corporate advertising often forces a company to make important decisions about itself. And that is a valuable contribution indeed. The result can be a better corporation and an advertisement you can be proud of.

When the first ad is set in type and the engravings are in place, you’ll face the moment of truth. Was it all worth it? If you feel a sudden urge to run home and show it to your wife, your kids, even your father-in-law, you’ll know you’ve succeeded. You will have passed the hardest checkpoint of all.