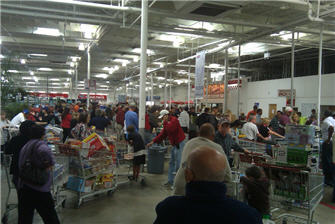 “Consumer confidence is the degree of optimism on the state of the economy that consumers are expressing through their activities of saving and spending. This confidence is measured by the U.S. Consumer Confidence Index (CCI). In the United States, the CCI is issued monthly by The Conference Board, an independent economic research organization.”

For the last few years, I’ve found a far more reliable indicator I can see (and taste) up close.

And though this data will never make it into a General Accounting Office publication, I trust it implicitly.

Why, it’s the Costco Confidence Index: a simple measure of consumer confidence, easily gauged by going to your nearest Costco, and seeing how much stuff is in shoppers’ wagons.

Costco is is the largest membership warehouse club chain and the third largest retailer in the U.S.

What’s interesting about Costco, unlike Walmart, is you can just as easily be standing on line behind a single working parent who’s stocking up on toilet paper, as you can a surgeon buying brie and bordeaux for a dinner party.

At the height of the real estate bubble in 2006-2007, shoppers’ wagons were stacked high with everything from electronic gadgets to gourmet food to stock necessities, like paper towels.

But as the real estate market started to tank, and especially after the financial markets crash of 2008, you saw a scared public reigning in their spending en masse.

Gone were the days of frivolous bulk buying, and in came the biggest collective belt tightening most of us have ever witnessed.

Well, today (Sunday 2/20/11),  I saw a definite uptick on the Costco Confidence Index: a completely packed parking lot, wagons overflowing with items and a 15-minute wait on the shortest line to check out.

There is a definite change in consumption happening now — people are tired of not spending money!

The double dip which should have happened never did. Ditto inflation.

And the alarmists’ cries about decimated home values, withering 401(k)s, massive unemployment and the devaluing dollar is a song consumers are sick of hearing.

Don’t get me wrong, I think the United States, and the rest of the world by extension, is still in the crapper if a major course correction doesn’t  happen sometime soon.

And I’d bet another bailout is more likely than not to prevent the rapidly expanding list of insolvent states from going over the cliff.

For now, 2011 is looking to be the year when consumers’ wallets are opening again… and you’ll want to be in front of that line.