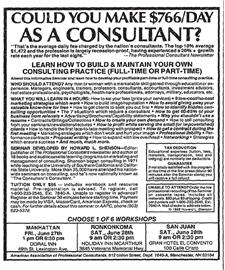 Here’s a lead generation ad from the mid-80’s which ran strong for over ten years in major newspapers from coast to coast. It’s a proven template which can be modified for almost any type of seminar.

The man running the ad was Howard Shensen, “the consultant’s consultant,” who taught countless others how to do the business of consulting.

This is the ad Ted Nicholas wrote for Shensen’s book, “Consulting Success.”

Shensen not only made a fortune selling his how-to-consulting info to paid seminar attendees but also made a killing on the rental of his list. I knew someone who rented Howard’s list in the 90’s and discovered it was very dirty — lots of dead people were on it. It was just too profitable for Howard to take them off his list.

Nevertheless, no one has managed to replace Howard Shensen since moving on to that great consultancy in the sky. I predict we’ll be seeing a migration of real estate gurus to “how to be a consultant” gurus this year.