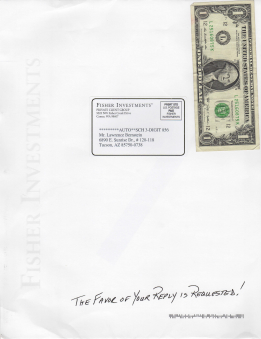 Advertisers sabotage themselves in countless ways.

But of all the ways to go wrong, this one is the CAPITAL crime of direct response advertising.

And, while it’s a crime of omission, it murders sales (and growth) like no other.

Direct response is a game of constant measuring… and observing cause and effect.

Take an action, see what happens… tinker with a break-even headline and perhaps, turn it into a winner… change up an offer and see what effect it has on response rates.

If you’re not testing, or not testing as vigorously as you should, (I’m also in this group) then take heart. There are some pretty big players in the game who’ve been doing things the same way because that’s how they’ve always done them.

Take Fisher Investments. I wrote about them in 2013 and was promptly contacted by their marketing director. He was a pleasant fellow and we had a 10-minute chat, but nothing he said contradicted what I wrote in my original post.

Fisher has $40 BILLION in managed assets and that makes them one of the biggest investment/mutual fund companies in the United States.

They also are reputed to spend $30 million a year on direct mail marketing.

But does that mean they know what they’re doing in direct mail?

The answer is a resounding “NO!”

I’ve been on their prospect list for SEVEN years and counting without taking a single action. Yet, I still keep receiving the same oversized 11 x 14 inch direct mail piece that challenges even the largest of mailboxes.

The idea of the oversized envelope is simple — it’s the antithesis of the Gary Halbert “sneak-up” approach that uses a plain #10 envelope with only a street, city and state in the return address.

Fisher’s DM is so massive, there’s no way you can miss it and the recipient is almost guaranteed to open it.

But it’s a one-trick pony.

The hulking size that compels opening on the first mailing is exactly what works against it on subsequent ones.

The reader already knows what’s inside the envelope…

and the mail piece winds up in the round file.

Now, to be fair, Fisher does some direct mail testing.  I’ve seen the old and tired envelope teaser copy, “The favor of your reply is requested,” switched out for “A Special Invitation” in Gold cursive with a corresponding change of their premium. They’ve also tested the faux “security seal” popularized by Suarez Corporation.

But their overall DM approach hasn’t budged in years.

I wasn’t looking for a new client, and I had no qualms about sharing a few simple ideas with their marketing director when he asked: “How can we make it better?”

With a whopping $40 billion under management, you’d think they’d go a little deeper, like adding ascension into their marketing mix.

After all, how much easier would it be selling a newsletter on the front end and getting a crack at establishing some credibility and rapport with paying customers… and only then persuading them to invest?

And adding ascension has an even bigger advantage because paying newsletter subscribers almost ALWAYS OPEN their mail. So, instead of the atrocious waste circulation involved in bombarding one prospect with the same limp mail piece, you get a chance to sell an existing customer once a month in a variety of ways.

Fisher’s other BIG problem is their one-size-fits-all approach. “If you have $500,000 to invest, then download this free report.”

Yes, it’s a mechanical approach and yes, it works. As marketers, we need to qualify the right prospects but it ignores a fundamental factor.

There are a myriad of motivations and mindsets among these investors.

Here are a few:

When you can speak to the dreams and desires of individual groups of investors, then you get a crack at driving response way up. 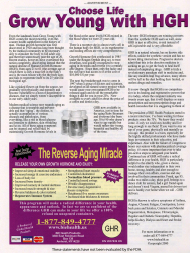 A competent C-Level copywriter could go to town with this ad, IF he were allowed to do some testing!

It’s been running unchanged for 15 years and hardly a month goes by that I don’t come across a full page insertion.

Take a look at the ad and you’ll notice it has a year 2000 copyright notice. Purple headline font… purple text box… nothing’s changed in 15 years. I know some writers who were in pre-school when this ad had its first insertion!

Obviously, this ad is making money, but how much money has been left on the table after all these years by NOT TESTING?

When you’ve got a full page ad that works for so long, it’s your obligation to test.

This fractional ad is one of my favorites.

The company’s been running 1/8th of a page insertions for almost as long as BIE’s HGH ad.

If you were running an 1/8th of a page insertion that brought home response month in and month out, what would you do?

But you’d need SOME COPY to achieve this — and that would mean sacrificing the 50% of the ad taken up by the founder’s head shot.

In parting, here are three little letters to live by: A.B.T.