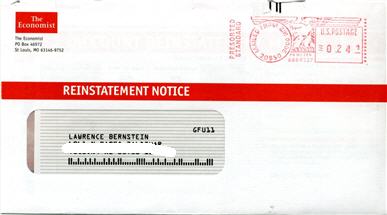 The Economist is one of those magazines that takes a half-dozen nudges to get me to renew my subscription.

And they’re usually successful because they keep nudging.

After sending several envelopes with “subscription expiration” as the teaser copy, they waited several weeks before recently sending this “Reinstatement Notice.”

What a great idea. It’s something all small business owners can mimic for reactivating fallen away customers.

Instead of upbraiding the subscriber for leaving, they reach out and welcome him back into the fold. As far as I can tell, the offer is the same as the expiration notice: a fat discount off the newsstand price and a few typical goodies like “The Pocket World In Figures.”

As opposed to most of their counterparts, it’s always educational to observe how The Economist approaches renewals as well as customer acquisition.

Here is the first page of a letter written in 1981 which was a control for 15 years. (Use the magnifier icon over the image to enlarge it, once opened in a new window.)