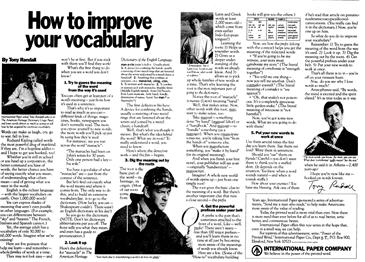 Most direct marketers think ‘Fortune Fives’ are bloated behemoths who couldn’t pull off a successful direct response promo to save their corporate lives.

Were we all to “read better, write better and communicate better,” as the ad urges us, I suppose we’d be consuming even more paper.

Nevertheless, you could easily transpose the Learning Company for International Paper, add an order coupon, and you’d have a top flight direct response ad today.

Here’s the transcript from the hefty, “How To Improve Your Vocabulary”

International Paper asked Tony Randall who is on the American Heritage Dictionary Usage Panel and loves words as much as acting to tell how he has acquired his enormous vocabulary. Words can make us laugh, cry, go to war, fall in love.

Rudyard Kipling called words the most powerful drug of mankind. If they are, I’m a hopeless addict – and I hope to get you hooked too!

Whether you’re still in school or you head up a corporation, the better command you have of words, the better chance you have of saying exactly what you mean, of understanding what others mean – and of getting what you want in the world.

English is the richest language – with the largest vocabulary on earth. Over one million words!

You can express shades of meaning that aren’t even possible in other languages. (For example, you can differentiate between “sky” and “heaven”. The French, Italians, and Spanish cannot.)

Here are five pointers that helped me learn – and remember – whole families of words at a time. They may not look easy – and won’t be at first. But if you stick with them, you’ll find they work!

What’s the first thing to do when you see a word you don’t know?

1. Try to guess the meaning of the word from the way it’s used.

You can often get at least part of a word’s meaning – just from how it’s used in a sentence.

That’s why it’s so important to read as much as you can – different kinds of things: magazines, books, newspapers you don’t normally read. The more you expose yourself to new words, the more words you’ll pick up, just by seeing how they’re used.

For instance, say you run across the word “manacle”:

“The manacles have been on John’s wrist for 30 years. Only one person had a key – his wife.”

You have a good idea of what “manacles” are – just from the context of the sentence.

But let’s find out exactly what the word means and where it comes from. The only way to do this, and to build an extensive vocabulary fast, is to go to the dictionary. (How lucky, you can – Shakespeare couldn’t. There wasn’t an English dictionary in his day!)

So you go to the dictionary. (Note: don’t let dictionary abbreviations put you off. The front tells you what they mean, and even has a guide to pronunciation)

2. Look it up. Here’s the definition for “manacle” in the American Heritage Dictionary of the English language.

“Manacle, usually plural. 1. A device for confining the hands, usually consisting of two metal rings that are fastened about the wrists and joined by a metal chain; a handcuff. 2. Anything that confines or restrains; manacles, ing, -cles. 1. To restrain with manacles. 2. To confine or restrain as if with manacles; shackle, fedder. (Middle English manicle, from Old French from Latin Manicula, little hands, handle. Diminutive of manus, hand. See man- in Appendix.

The first definition fits here: a device for confining the hands, usually consisting of two metal rings that are fastened about the wrists and joined by a metal chain: a handcuff.

Well, that’s what you thought it meant. But that’s the idea behind the word. What are its roots? To really understand the word, you need to know. Here’s where the detective work — and fun — begins.

3. Dig the meaning out by the roots.

The root is the basic part of the word – its heritage, its origin. (Most of our roots come from Latin and Greek words at least 2,000 years old – which come from even earlier Indo-European tongues!).

Learning the roots: one, helps us remember words. Two, gives us a deeper understanding of the words we already know. Three, allows us to pick up whole families of new words at a time. That’s why learning the roots is the most important part of going to the dictionary. Notice the root of “manacle” is “manus,” Latin meaning “hand.”

Well, that makes sense. Now, other words with this root, man, start to make sense too.

Take manual – something done “by hand,” manual labor or a handbook. And manage to handle something (as a manager). When you emancipate someone, you are taking him from the hands of someone else.

When you manufacture something, you make it by hand (in its original meaning).

And when you finish your first novel, your publisher will see your “originally handwritten – manuscript.”

Imagine! A whole new world of words opens up – just from one simple root!

The root gives the basic clue to the meaning of a word, but there’s another important clue that runs a close second – the prefix.

4. Get the Powerful Prefixes under your belt.

A prefix is the part that’s sometimes attached to the part of a word like a–well–prefix. There aren’t many–less than 100 major prefixes–and you’ll learn them in no time at all just by becoming aware of the meanings of words you already know. Here are a few (several of the “how-to” vocabulary building books will give you the others).

Now, see how the prefix (along with the context) helps you get the meaning of the italicized words:

– “If you are going to be my witness, your story must corroborate my story.” (The literal meaning of corroborate is “strength together.”)

– “You told me one thing — now you tell me another. Don’t contradict yourself.” (The literal meaning of contradict is “say against.”)

– “Oh, that snake’s not poisonous. It’s a completely innocuous little garden snake.” (The literal meaning of innocuous is “not harmful.”)

Now, you’ve got some new words. What are you going to do with them?

5. Put your new words to work at once.

Use them several times the first day you learn them. Say them out loud! Write them in sentences.

Should you “use” them on friends? Careful — you don’t want them to think you’re a stuffed shirt. (It depends on the situation. You know when a word sounds natural — and when it sounds stuffy.)

How about your enemies? You have my blessing. Ask one of them if he’s read that article on pneumonoultramicroscopicsilicovolcanoconiosis.

(You really can find it in the dictionary.) Now, you are one up on him.

So, what do you do to improve your vocabulary?

1. Try to get the meaning of the word from the way it’s used.

3. Dig the meaning out by the roots.

4. Get the powerful prefixes under your belt.

5. Put your new words to work at once.

That’s all there is to it — you are off on your treasure hunt.

Now, do you see why I love words so much?

Aristophanes said, “By words, the mind is excited, and the spirit elated.” It’s as true today as it was when he said it in Athens — 2,400 years ago!

I hope you’re now like me – hooked on words forever.

Years ago, International Paper sponsored a series of advertisements, “Send me a man who reads,” to help make Americans more aware of the value of reading.

Today, the printed word is more vital than ever. Now, there is more need than ever before for all of us to read better, write better, and communicate better.

International Paper offers this new series, in the hope that even in a small way, we can help.

For re-prints of this advertisement, write:

Intentional Paper Company, we believe in the power of the printed word.