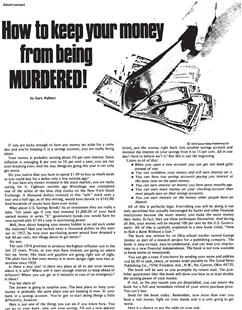 Here’s a 1974 ad Gary Halbert wrote for a book entitled, “How To Rob A Bank Without A Gun.”

Though interest rates and consumer banking are a world different than in 1974, much of the ad copy could be used straight off the rack in the year 2008.

The year 1974 promises to produce the highest inflation rate in the last 22 years. Prices, as you may have noticed, are going no where but up. Some, like meat and gasoline are going right out of sight. The plain fact is that your money is in more danger right now than at anytime since 1929.

Is there a way out? Is there any place at all to put your money where it is safe? Where it will earn enough interest to keep ahead of inflation? where you can get at it instantly in case of emergency?

You bet there is!

The answer is going to surprise you. The best place to keep your money is…

“How To Keep Your Money From Being Murdered”

Interesting, for such a copy perfectionist as Gary was, that there are a few typos in this ad.