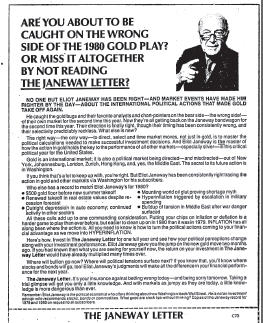 ARE YOU ABOUT TO BE CAUGHT ON THE WRONG SIDE OF THE 1980 GOLD PLAY? OR MISS IT ALTOGETHER BY NOT READING THE JANEWAY LETTER?

NO ONE BUT ELIOT JANEWAY HAS BEEN RIGHT— AND MARKET EVENTS HAVE MADE HIM RIGHTER BY THE DAY— ABOUT THE INTERNATIONAL POLITICAL ACTIONS THAT MADE GOLD TAKE OFF AGAIN.

He caught the gold bugs and their favorite analysts and chart-pointers on the bear side—the wrong side! — of their own market for the second time this year. Now they’re all getting back on the Janeway bandwagon for the second time this year. Their direction is finally right, though their timing has been consistently wrong, and their selectivity predictably reckless. What else is new?

The right way — the only way — to direct, select and time market moves, not just in gold, is to master the political calculations needed to make successful investment decisions. And Eliot Janeway is the master of how the action in gold holds the key to the performance of all other markets—especially silver— in this critical political year for the United States.

Gold is an international market; it is also a political market being directed — and misdirected — out of New York, Johannesburg, London, Zurich, Hong Kong, and, yes, the Middle East. The secret to its future action is in Washington.

If you think that’s a lot to keep up with, you’re right. But Eliot Janeway has been consistently right tracing the action in gold and other markets via Washington for his subscribers.

Who else has a record to match Eliot Janeway’s for 1980?

All these calls add up to one commanding consideration. Putting your chips on inflation or deflation is a harder game to play than ever before, but easier to clean up on in 1980 than it was in 1979. INFLATION has all along been where the action is. All you need to know is how to turn the political actions coming to your financial advantage as we move into HYPERINFLATION.

Here’s how. Invest in The Janeway Letter for one full year and see how your political perceptions change along with your Investment performance. Eliot Janeway gave you the jump on the new gold move two months ago. If you had known then what you are seeing for yourself now, the return on your investment in The Jane- way Letter would have already multiplied many limes over.

Where will bullion go now? Where will political tensions surface next? If you know that, you’ll know where stocks and bonds will go, tool Eliot Janeway’s judgments will make all the difference in your financial performance for the next year.

The Janeway Letter. It’s your insurance against betting wrong today—and being sorry tomorrow. Taking a trial glimpse will get you Only a little knowledge. And with markets as jumpy as they are today, a little knowledge is more dangerous than ever.