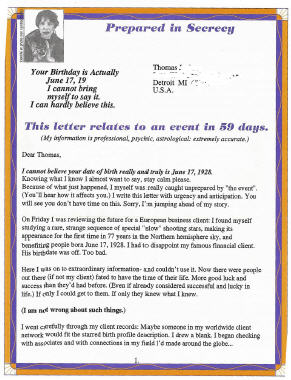 (From Lawrence: the following is guest published by a friend and ingenious marketer who once beat Jay Abraham in a head-to-head direct mail contest. I’m not sure he wants his name published and I couldn’t think of a suitable nom de plume. Certainly not the now exhausted Mr. X. There’s a link to DL the inspiration for this piece at the bottom of this post.)

The Murky Backwaters of Direct Mail…Where the Suckers Moon

There’s a lot of ballyhoo, thumping, carping and guru-izing about the value of a customer list.

Sooner or later, you realize it really is the list and a Joe Sugarman type offer that takes home the candy.

The term “list” is a pleasant synonym for a nasty two-word phrase that indoctrinated me into the world of selling/influence peddling.

It burned a nasty scarlet scar in my processor and I can’t erase it from memory. I’ll carry it with me to the next world.

An innocent lad from the midwest stumbled upon the truth at an early age but didn’t recognize till a few decades later, just how evil it can be in the wrong hands.

Now, every time I see or hear the word “mailing list” or “customer list,”I flash back to the truth etched deep and dark within.

What’s the origin of that vulgar word “Sucker List”?

That’s the term phone solicitors used for the “marks” on their telephone lists, in the Boiler Rooms of the Roaring 20’s.

The stock market was the “easy road to riches” then and this was one of the first “technical fleecings” of the great unwashed masses.

We’re much more sophisticated today, aren’t we? Today we just call it a list.

The internet is the latest “Bucket Shop” with sleazy hustlers looking for a hot “sucker list”.

I hate that word because it is demeaning. However it’s a caustic reminder that keeps me
on the straight and narrow path.

This attached letter was reminder of what we’re dealing with when we tamper with the human condition.

I found it and a pile of other similar collateral sitting outside a dumpster in my storage facility.

National Enquirer and Midnight Globe ads piled neatly and left to rot in the sun along with a few odd letters just like this.

You really do have to hold it in your hands to get the full effect. You need to feel it and wonder just how “Thomas” felt as he slit it open and peeked in.

Apparently he didn’t bite (this time) because the coupon is still intact. Yet he did think about it because, there it was among his odd collection of magic, easy money solutions.

It’s monarch size, cute, cuddly and something we’d all open, wouldn’t we?

The postcard “It’s a Shocker” is a decent subject line or even headline. Sure got me to pick up and dig in.

Gene Schwartz encouraged getting in touch with the masses but I don’t think he would stoop to this level. Ben Suarez jumped into this market with a backhoe and mined a nice fortune. What do you expect from the influence of Sir Gary?

Not for me, maybe not for you, but no reason why we can’t grovel and slum a bit if only for an enchanted moment and chuckle as we jot down notes to use on our next promotion.

(Right click on this link and “Save link/target as” to download the 2 MG PDF — the inspiration for this piece.)