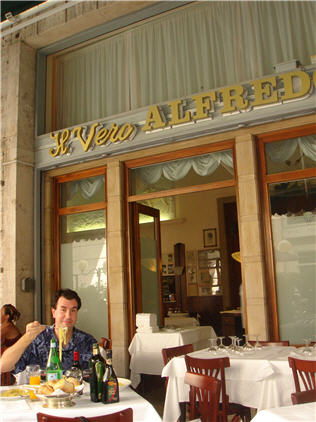 For the longest time, I was confounded by my next door neighbor’s success in the restaurant business.

His brand of marketing is foreign to my direct response mind.

From the smiling images of him on everything from wine labels to billboards…to the hundreds of photos of him posed with celebrities, sports stars and U.S Presidents adorning his restaurants’ walls …to the zany, almost incomprehensible late night TV commercials.

What’s more, his restaurant’s food is good, but far from great. His chef couldn’t stand in the same kitchen with the little restaurant down the street run by a husband and wife team, yet he does twenty times the business they do.

I’ve finally reconciled myself to the fact that what he does works. And not merely because he sold one of his restaurants to a national restaurant chain for a big payday.

No, it took a visit to “Il Vero Alfredo” in Rome, home of the eponymous sauce, well known in America and met with a blank stare in most of Italy, to convince me so. 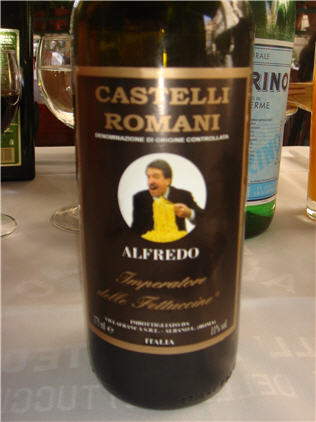 The restaurant is unusual in most respects, starting with the theatrical name “Il Vero Alfredo: Imperatore Delle Fettucine” or “The Real Alfredo: Emperor of the Fettucine.”

Alfredo’s is no mere restaurant, it’s a shrine to the pasta shape known as “little ribbons” and a triumph of that perplexing concept to direct response adherents: branding.

Walk into Alfredo’s and behold the hundreds of pictures of three generations of Alfredos with royalty, heads of state, and film actors from almost every country, which decorate the walls. Where have I seen that before?

For many reasons which are impractical to delve into here, most buongustaios — devotees of good taste in food and wine — will tell you ‘Alfredo Sauce’ doesn’t really exist.

But that hardly matters.

The perception has become reality

And for lack of vocabulary to describe this approach, I’ve settled on the term: 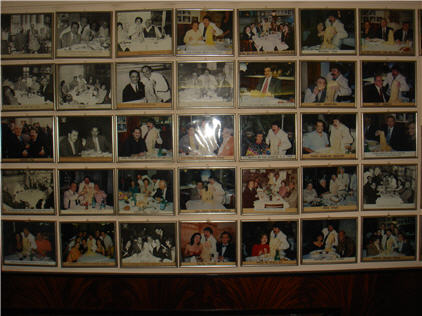 Both Alfredo and my neighbor have taken the mundane and wrapped an aura of majesty around it.

Interestingly, for all of my next door neighbor’s promotional prowess, out of the spotlight, he’s a soft spoken and unassuming man. I suspect he can get in and out of promo mode as nonchalantly as most put on or take off a hat.

Both Alfredo and my neighbor are promoters first and restaurateurs second. I think if most restaurant owners (and small business owners in general) could trade a fraction of their restaurant skills for promoting skills, it wouldn’t be long before their walls were covered in kitschy pictures too.

Oh, and in case you were wondering, how was the fettuccine Alfredo at Alfredo’s?

Good enough to make even the most hardened Atkins’ follower give up his ways for a day.