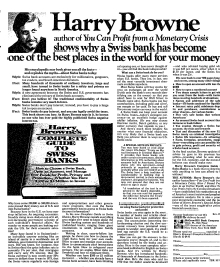 Harry Browne
author of You Can Profit from a Monetary Crisis shows why a Swiss bank has become one of the best places in the world for your money!

His encyclopedic new book gives you all the facts — and explodes the myths — about Swiss banks today:

Fact: Many hundreds of thousands of ordinary investors, large and small, have turned to Swiss banks for a safety and privacy no longer found anywhere in North America.

Myth: A new agreement between the Swiss and U.S. governments has eliminated the privacy of Swiss bank accounts.

Fact: Don’t you believe it! The traditional confidentiality of Swiss banks remains very much in force.

Myth: Swiss banks don’t pay interest; instead, you have to pay a large tax to open an account.

Fact: Swiss banks do pay interest, and you can legally avoid the taxes. This book shows you how. As Harry Browne says in it, he knows no one who bas ever paid the highly publicized Swiss negative interest tax.

Because here in the U.S. we have nonstop inflation. An ongoing recession. Steadily rising taxes. And,on top of it all, ever-increasing government scrutiny of each individual’s financial affairs. No wonder so many people are looking outside the U.S. for their economic salvation!

Many have found it in Switzerland— an incredible country existing like an island of sanity in a worldwide sea of inflation, governmental domination and wars. Did you know, for instance, that in Switzerland the price inflation rate is currently 1% per year, that mortgages still carry only 6% interest, that the Swiss currency is now worth over 50% more in dollars than it was in 1973, that the Swiss voters regularly veto foreign aid appropriations and other government programs, that even the Swiss government has no access to Swiss bank account information?

In his new Complete Guide to Swiss Banks, Harry Browne reveals everything you might ever need to know about the Swiss banking system and hundreds of individual banks, ranging from giant institutions to small, private family concerns.

Writing in clear, easy-to-follow language, he shows you how to choose the right Swiss bank for your own needs. How to open and manage your account. How to communicate your instructions to the bank. How to safeguard your privacy. The tax angles. What risks are involved and how to eliminate them.

Whether you have $100 or $1 million to invest … whether you already have a Swiss bank account, have been thinking of opening one, or have never thought of it—you will find this book indispensable!

What can a Swiss bank do for you?

Swiss banks offer many more services than U.S. banks. They are, in fact, one of the most versatile investment channels available anywhere.

Most Swiss banks will buy stocks for you on exchanges all over the world (with only the bank’s own records identifying you as the owner) so that you don’t have to wait for Wall Street to finally come alive. Swiss banks can buy commodities, including gold and silver, on margin or for cash. Or buy and sell for you any major currency in the world.

A Swiss bank can keep your account in Swiss francs—today’s strongest currency—as an excellent hedge against dollar inflation. (Or you may choose German marks, Dutch guilders, or any other currency that appeals to you.)

And there’s much more besides! No matter what your financial objectives, it’s very likely that a Swiss bank can help you advance them in ways no U.S. bank could.

You may have heard or read about the recent U.S.-Swiss “Treaty on Mutual Assistance in Criminal Matters.” It provides that Swiss banks will, under certain circumstances, disclose information to U.S. authorities about accounts held by Americans. Browne shows why this agreement—aimed primarily at organized crime—will probably affect you very little if at all. The Swiss have a long tradition of confidentiality in banking that is deep-rooted, central to their national character, and good for business. You may rest assured that they are not about to sign it away!

*A translation of the text is reprinted in the book’s Appendix— so that you can read for yourself the difference between the Treaty and the was it’s been reported.

Swiss banks are once again in the news. A number of books and articles about Swiss banks have been published this year. The uncertainties concerning the forthcoming election and the slow economic recovery have prompted many people to wonder, once again, if a small nest egg outside the U.S. would be a prudent asset.

Now you can get the answers to the questions you’ve thought of, and to the questions raised by the books and articles. Here is the most complete reference book published in English on Swiss banks. And it’s written by Harry Browne, who has introduced hundreds of thousands of Americans to the Swiss bank idea. He’s the man who said in 1970 that the dollar would be devalued—and who advised buying gold when it was $35 per ounce, silver when it was $1.50 per ounce, and the Swiss franc when it was 23 cents.

His new book is over 500 pages long and covers, among many other things:

In the final section, Browne updates the advice he gave in his previous bestsellers—revealing what he sees ahead for the U.S. economy, and the moves he believes you should make now.

Harry Browne’s Complete Guide to Swiss Banks is a book that no American with anything to lose can afford to be without!

THE AUTHOR: Harry Browne’s three earlier bestsellers—You Can Profit from a Monetary Crisis, How I Found Freedom in an Unfree World, and How You Can Profit from the Coming Devaluation —have established his reputation as one of America’s most incisive and prophetic economic analysts. He is also a prominent investment counselor and the publisher of Harry Browne’s Special Report —one of the most sought-after private financial newsletters.