Imagine having to wake up each morning and come up with a startling, new headline to sell your product.

Furthermore, imagine you’re in a cut-throat industry in which yesterday’s laurels mean diddley and constant threats like union strikes hang over your head.

To top it off, industry or niche specialization offers no advantage. Your market is any literate person with a pulse. Your only job is to sell, sell, sell.

Your headline must be so arresting, it causes an i-banker racing down the street…with a briefcase in one hand…a Starbucks cup in the other…and a Bluetooth headset on his ear…to crane his neck and soak up the marvel of copy calling out to him like a blue collar siren.

This is precisely what the publishers and editors of the New York City tabloids have had to deal with for decades and that’s why they house some of the deftest headline writers.

Take, “Headless Body In Topless Bar.” If this isn’t the most elegantly compact and titillating crime headline ever written, then I’ll freely stand in the way of that hood’s front page kick.

These are two of the most memorable newspaper headlines ever written. The Post and The News seem destined to battle each other in this gladiatorial headline game till one or both of them drop.

And what of the “old gray lady,” The New York Times?

Unintentionally, it can be just as entertaining as its lesser colleagues. Like this 1984 classic, “Unknown Arm of Sicilian Mafia Is Uncovered in the United States.” 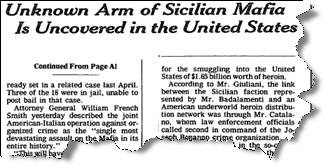