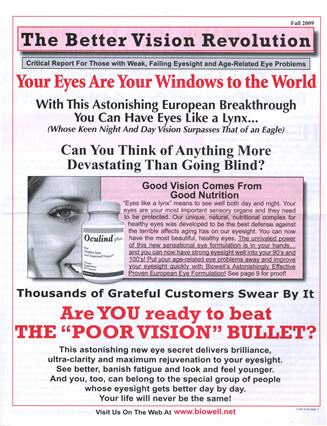 Whenever I interview a prospective copywriting or consulting client, one of the first questions I usually ask is: “who’s this product for?”

And more often than I’d like to hear, I get the answer: “it’s for everyone.”

Experience has taught me to defer on such projects because the prospective client has no idea who his or her target market is. And that signals there’s usually a basket of oversights and problems in addition to this biggie.

Conversely, when you ask the question, “who’s this product for?” and get an answer like, “it’s for single executive women who live in Tribecca, have aspirations to be a managing director and spend their summer weekends in the Hamptons,” then this is as green as lights get.

These clients not only know who their target market is but they’ve likely designed the product with this demographic in mind.

Does this mean there are no products with “everyone” as the target audience.

Well, yes and no.

Here’s a headline for a product that’s theoretically for “everyone.”

“A CLOGGED COLON is a Deadly Colon. Unclog now — before it’s too late!”

A clogged colon is certainly an urgent health problem. 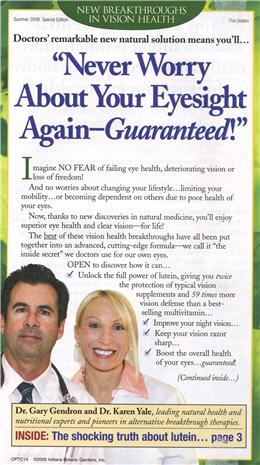 Wouldn’t such a product be for everyone?

To be in the target audience for this product, the prospect has to not only 1) have a colon but 2) be conscious of this fact and 3) care about it.

And in our direct response world, this consciousness of the condition is usually rooted in a health problem, which we as copywriters must agitate if we want them to respond.

A “Headline Nightmare” analogous to “This product is for everyone.”

Take a look at the mess of an ad on top — the one with all the headlines.

It’s all over the place.

It has a newsletter type header, “The Better Vision Revolution,” then a headline in red, “Your Eyes Are Your Windows to the World,” then a sub-headline with”Astonishing European Breakthrough,” then another sub-headline in the form of a question,” Can You Think of Anything More Devastating Than Going Blind?,” then a text box with an image of a woman’s face and the product…then a pre-head, “Thousands of grateful customers swear by it” and again…another bold red headline, “Are YOU ready to beat the “POOR” VISION BULLET?”…whatever that means.

Geez, that was exhausting.

Are you still there?

I’ve seen some ad writers go astray but rarely as flagrantly as this.

Is there any reasoning behind it?

Yes, it bears resemblance to the marketer who claims his product is for everyone. 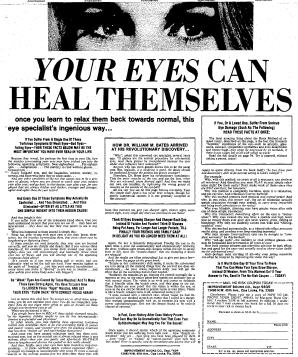 One Headline That Strikes at the White Hot Core

Instead of picking one hard-hitting headline and focusing all energy on it, like the exemplary “Never Worry About Your Eyesight Again — Guaranteed” or Gene Schwartz’s “Your Eyes Can Heal Themselves,” this ad writer reasoned that the more headlines he crammed onto the page, the higher the response.

But copywriting doesn’t work this way.

This kind of copy approach is like grabbing a shotgun and firing pellets in every direction without striking a single target.

It’s no surprise that the Botanic Choice magalog mails over and over and the Gene Schwartz space ad had years worth of insertions.

They know their target market and strike at the white hot core of it — the fear.

Have you ever seen the look of fear on someone’s face who’s losing his eyesight? It’s palpable.

“Never worry…again” addresses this fear, arguably the most important driver, right in the headline.

Ditto for Gene Schwartz’s ad which centers on a non-intervention approach to healing eye troubles.

Gene would not write the headline until he vaccuumed all the claims out of a book, prioritized them, then let them percolate for a while.

But it doesn’t really matter which headline school you belong to — crafting the headline as your first copywriting step or waiting to the end.

What matters is knowing your target market so well, you know what your average prospect eats for lunch, which magazines he reads and what his secret aspirations are. Once you know this, the headline is often more than halfway written.