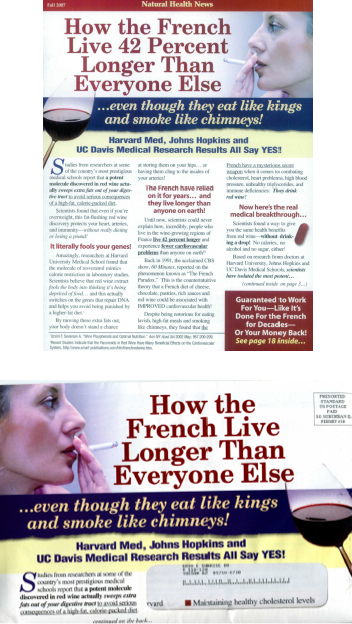 How The French Live 42 Percent Longer Than Everyone Else… even though they eat like kings and smoke like chimneys!

Interestingly, in every version I’ve ever seen of this package, there has been only one design change and one copy change. The design change is an updated photo of the (now older) medical expert, Dr. William S. Gruss. And the copy change on this control was the headline.

How The French Live 42 Percent Longer Than Everyone Else

How The French Live Longer Than Everyone Else

Why does this package keep going…and going?

Ever since Professor Serge Renaud coined the term “French Paradox” and the perennial American investigative TV show, 60 Minutes, did a story on it in 1991, the concept has become rooted in the collective mind of the American public that moderate drinking of red wine is good for you.

How else could the French gobble down brie and baguettes, smoke like chimneys and imbibe bottles of wine each week? Besides the fact that a large segment of baby boomers are predisposed to the idea that drinking red wine is healthful, the evidence of the French paradox has been upheld in film and popular culture for years.

Revatrol/resveratrol not only packs the powerful tacit endorsements of such authorities as Harvard Medical School, Johns Hopkins, The Salk Institute and others, but the processed red wine extract contains no alcohol. One pill packs the protective properties of 50 (fifty) bottles of wine!

Study this piece because it defines direct mail winner to the T. There are other strong ads for resveratrol but none has had the staying power of this one. Layout is also done beautifully in this piece.

And if you are interested in hundreds of direct mail and space ad controls like this, you’ll find plenty in this copywriter’s playground.