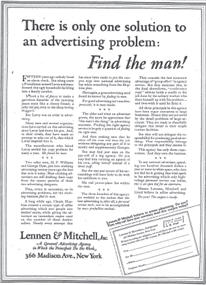 This ad was was written by Philip W. Lennen in 1924 and effectively launched the ad agency Lennen & Mitchell.

Lennen described the ad as follows:

“The effect of the advertisement was electric. It secured us leads on two very important accounts, which are still in our house today.”

“Conference copy seldom holds a candle to the job done by the solitary worker who shuts himself up with his problem — and lives with it until he licks it.”