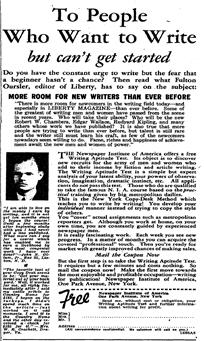 In 1960, the Famous Writers School opened its doors and followed in the profitable footsteps of its business twin, the Famous Artists School.

In the year 2000, American Writers and Artists Institute or AWAI, first cast its wide net in the biz-op market. I remember my mailbox was pelted for several years with AWAI’s magalogs. One of its mainstay headlines was something like: “Last year I went through a bitter divorce. I needed time to laugh…time to cry…and time to make millions writing simple sales letters.”

I don’t remember seeing a biz-op offer in magalog form before them. They still seem to be going strong though I’ve wandered off their list.

So what did the Famous Writers School and AWAI both have in common?

They were following a well established business model in the writer’s market developed by the Newspaper Institute of America in 1926.

Actually, that seems to be one of the keys of making this type of business take off. It’s doubtful the numerous versions of the above ad would have run for 34 years had they been called Ajax Direct, Inc.

And since this is a mail order business, location is hardly important. Newspaper Institute of America was run out of an office at 1 Park Avenue in New York but they could have likely succeeded in the sunny yet rough and tumble stretch of Delray Beach, Florida that’s home to AWAI today.

Interestingly, AWAI has combined the best of the names of these three entities: Famous Artists School, Famous Writers School and Newspaper Institute of America.

The success of this little N.I.A. ad demonstrated the depth of this market for years to come.

Here is the heart of the ad.

Newspaper Institute of America offers a free writing aptitude test. Its object is to discover new recruits for the army of men and women who add to their income by fiction and article writing. The writing aptitude test is a simple but expert analysis of your latent ability, your powers of observation, imagination, dramatic instinct, etc. All applicants do not pass this test. Those who do are qualified to take the famous NIA course based on the practical training given by big metropolitan dailies.

Like it’s predecessor, the Famous Artists School, it’s doubtful the N.I.A ever “rejected” a respondent to their ad. That qualifier, however, turned the ad into one of the best lead generation ads ever published.

“To People Who Want to Write But Can’t Get Started.”