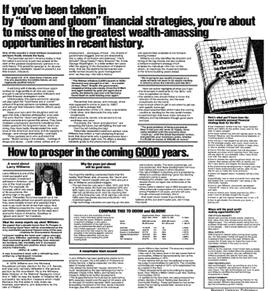 Unlike traders, marketers have the luxury of choosing a Plan A and a Plan B.

What I mean is we don’t have to pretend we’re smart enough to time the market. And we don’t have to make any pronouncements about what will or won’t happen next week — though it pays to be just far enough ahead of the curve.

All we have to do is figure out what people want to buy now and find a way to sell it to them. And one of the best facilitators for doing this is studying successful ads of the past.

Take this ad for Larry Williams’ book, “How To Prosper In The Coming Good Years.” Williams, who’s been a “trader’s trader” for four decades, is perhaps best known for winning the Futures Trading World Cup Championship, by trading $10,000 in real money to $1,147,000 in twelve months, while the 1987 Crash was taking place.

This bullish ad and the book were a reaction to the gloom-and-doomers of the 1970s and 1980s, Doug Casey, Harry Browne and Harry Schultz. In fact, the title of Williams’ book piggybacked off the publicity of Howard Ruff’s book, “How To Proposer During the Coming Bad Years.”

All in all, this is a great template for bullish advertisers.

If you’ve been taken in by “doom and gloom” financial strategies, you’re about to miss one of the greatest wealth ammassing opportunities in
recent history.

One of the country’s most brilliant Investment advisors finally reveals the facts.

The best-kept secret in America today is that the nation’s economy is just now poised at the start of the greatest expansionary up move in re¬cent history. This powerful upsurge is, for all practical purposes, inevitable, based on powerful, but little-known, indicators.

It will bring with it literally enormous opportunities for huge profits to all who are canny enough to perceive these positive indicators and get their financial strategies in order.

Unfortunately, this same economic upsurge will also catch the “hard-times-are-a-coming” school of financial advisors completely exposed, and will cost their followers millions. Which camp are you in?

Keep your eye upon the doughnut and not upon the hole, a famous philosopher once said. The error that the “doom and gloom” advisory school commits is to ignore this advice. They have mistaken a temporary economic turbulence (the Carter years) for the long-term future. And in so doing, they have badly miscalculated the resilience of the American economy and its capacity to change—and change dramatically—overnight.

Three guesses as to who authored this quote: “Blood running in the streets…lootings of shops and stores…credit ruined, strikes and unemployment…shortages of food…the wheels of government clogged, and we are descending into a valley of confusion and darkness:’ Harry Schultz? Doug Casey? Harry Browne? No, it was George Washington, in a letter written ten years after the signing of the Declaration of Independence. And yet, the decline he bemoaned was swiftly turned around by good management and—as they say—the rest is history.

Remember this advice, and forecast, which was supposed to come to pass by 1982?
•    DJIA to fall to at least 300
•    Total destruction of the U.S. dollar unavoidable
•    Gold, silver, and diamonds the only safe investments
•    Bank accounts, bonds, and pensions to be worthless very soon.

Put simply, the “doom and gloomers” are projecting the future, but still fighting the last war. Don’t be left holding the bag!

Nationally respected investment advisor Larry Williams has written a myth-shattering financial book that documents why a great economic boom is gathering steam right now. He offers a detailed, readable guide to the phenomenal financial opportunities available to the forward-looking investor.

Williams not only identifies the direction and timing of the big moves, but also outlines a brilliant investment strategy which enables the individual—the man on the street—to maximize his investment dollars in the fortune-building years ahead.

Here are some highlights of what you’ll get:
•    the three best investments for the ’80’s—and how to capitalize on them.
•    the statistics one should follow to know the direction of the economy, and the best investments for the trend.
•    how to know when to get in and when to get out, with specific formulae.
•    the exact opportunities which make the coming months so exciting for the very small investor.
•    investment tips that have made fortunes for Williams and his followers through good years and bad.

How to prosper in the coming GOOD years.

Larry Williams is one of the most successful and iconoclastic investment advisors in America—and one of the most sought-after. For example, he forecast, within one week of its occurrence, the all-time high in the gold market. Thereafter, he turned bearish on it. He has continually picked out growth stocks before they were broadly known and watched them soar to as much as ten times their value. And now, Williams presents the most startling—and optimistic—assessment ever for-the near-term economic future of America. Goodbye to “gloom and doom” for investors.

What the money experts say about Williams: We expect that a decade hence How To Prosper in the Coming Good Years will be remembered as the only worthwhile personal finance tome of the year.
—Institute for Econometric Research I enjoyed reading the book and I agree strongly with Larry Williams’ optimistic view of the 1980s. Real economic growth, resulting from reduced tax burdens, has inevitably led to increased corporate profits and positive stock market returns historically.
-Arthur B. Laffer
A new investment book with a refreshing tack … written by a flamboyant Investor.
-Dan Dorfman

In 1978, Williams won the Montana Republican primary election for the U.S. Senate, and was only narrowly defeated in the general election by the incumbent. He is the Montana State Director of the National Taxpayers Union. And in 1980 he was the leader of Initiative 86, a successful tax reduction measure which made Montana the first state to fully index tax brackets, exemptions, and deductions by the rate of inflation.

Why the years just ahead will be good ones.

You’ll get the startling overlooked facts that the media, Wall Street, and, of course, the “doom and gloomers” haven’t caught onto yet. Here are just a few of Williams’ provocative insights:
•    The last three tax cuts were in 1964, 1975, and 1976. In all three cases, the DJIA was between 20% and 60% higher one year after the cuts took effect. The 1981 tax cut bill was much more far-reaching than any of the three prior cuts. Of all eight tax cuts since 1928, each has greatly spurred productivity—and investment gains.
•    High technology industries are opening up new jobs and products rapidly. This trend, surprisingly, can only accelerate. And these developments will more than replace job losses in other industries.
•    The rate of inflation is declining, and is projected by Williams to continue declining-given two startling predictions come to pass.
•    Reflecting the inflation rate, interest rates in this decade should not again rise to the levels of the recent past.
•    Jimmy Carter’s election loss in 1980 brought into office a financial conservative who is the nation’s first strong President in 20 years, and who will carry through a thorough monetary reform.

… And much much more! If you’d like to believe all this, but aren’t quite sure, don’t miss this book!

•    Larry Williams has been guiding his clients to fortunes for 14 years. He is the editor of Professional Timing Service, a highly-respected monthly newsletter of market advice.
•    He utilizes the renowned “Supply-Demand Formula” developed by the late market genius Henry Wheeler Chase in the 1930’s, and handed on by Chase to Williams for further development.
•    The Supply/Demand Formula has an astonishing 83% accuracy record over the span of 34 years, and for the past 12 months has been 100% accurate in, forecasting movement of the Dow Jones Industrial Average, plus 90% accurate on the individual stocks Williams has tracked. This accuracy explains Williams’ great following.
•    Also one of the heavy pros in the fast-paced field of commodities, Williams has consistently won at this game since starting in 1970.
•    In one national lecture tour he predicted a big corn¬ing surge in commodities for late 1972. The incredible commodity bull market of 1973-1974 established him as a leader in the field.
•    These developments led to his writing the popular book, How I Made a Million Dollars Last Year Trading Commodities (1973).
•    In addition to his new book, he’s also produced two others, Secrets of Stock Trading and Secrets of Commodity Trading. These are based on two earlier books that are being substantially revised and updated for 1982.

Here’s what you’ll learn from the most complete personal financial strategy book for the 80’s:
•    the investment vehicle that has made between 500% and 600% for the author every year for the past 12 years straight!
•    the stock market buy and sell signals given by the Federal Reserve, and the phenomenal statistics of investing based on these.
•    the one tip in real estate that will save $36,000 for the average couple, and much, much more for anyone buying or selling real estate in large cities, or who is actively involved with real estate.
•    how to find the new issues that will skyrocket—because you know who’s backing them (the book will pay back for you probably many, many times over with this datum alone!)
•    how to choose the right low-priced stock: the one criterion that weeds out the 95% of stocks you don’t care about, and targets the blockbusters.
•    the phenomenal developments in health care that haven’t been publicized (but will be, after it’s too late for you to make the most of them!)
•    where the biggest salary increases will be in the 1980’s.
•    specifically how to track and profit from what the big traders (the “commercials”) are doing in the commodity markets.
•    how to use Williams’ exclusively developed “Percent R” index to time your commodity buys and sells.
•    how to reduce your house payment by 50%—even if you’ve already bought the house!
•    where to get the highest interest rate in the U.S.
•    how to get double the interest your bank paying you.
Where will the great profit-making opportunities be?
THE STOCK MARKET:
Stocks are currently at lower prices, relative to their value, than they’ve been since the late ’40’s. Williams says, “You will see stocks rising from four to fifteen times their current market value by the end of the decade… that’s a bold statement; but it will take place.”
REAL ESTATE:
With long-term interest rates coming down gradu¬ally, the real estate market will again be the great investment that it was in the past. Williams dis¬cusses the 16 best ways to make the most of the real estate markets in the years to come.
COMMODITIES:
With by tar the cleanest, most honest data available to the investor, this market offers the greatest profits in the ’80’s for the person who can withstand risk. Williams presents the specific formulae, data sources, and statistics used by the best and most successful brokers.
HIGH TECHNOLOGY:
New technologies, many as exciting as any in the history of mankind, are coming on stream in the near future. The right technologies are sure to grow, and Williams identifies the best technology
investments in detail.
ENTERTAINMENT:
Here is the single, fastest-growing industry for the years ahead. Williams discusses the best ways to tap this tremendous growth market.