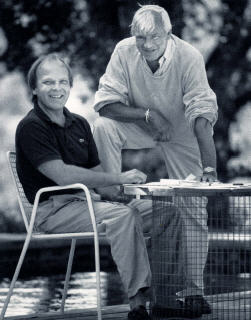 “Junk Mail’s Top Dogs” was an article that appeared in The New York Times Magazine on August 10, 1990.

Bill Jayme was the copy genius and Heikki Ratalahti was the design master behind over 200 winning direct mail packages.

Denny Hatch called them “the creative team of the century” and it’s hard to argue with that.

Some excerpts from the article:

One still-famous Jayme line was for Psychology Today: ”Do you close the bathroom door even when you’re the only one home?”

Owen J. Lipstein recalls traveling to see Jayme and Ratalahti in 1982 with $150,000 and an idea for a health magazine. In about 30 seconds, he told them its name, American Health, and explained that existing health magazines ”worshiped death” while this one would be ”life worshiping.”

Jayme says he and Ratalahti will spend three weeks crafting a package, with Jayme writing and rewriting the basic letter, a second letter, an order form and brochure, reading them aloud to himself and Ratalahti and never looking at readership profiles or surveys because ”that tells us what they have, not what they want or who they want to be.”