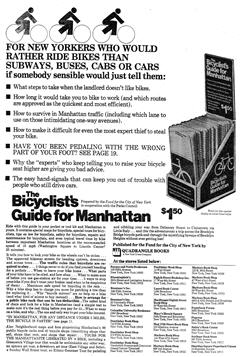 Here’s a 1972 display ad by one of the two pioneers of the modern copywriting bullet, Mel Martin. The other was Ralph Ginzburg.

Though this ad was written many years before Mel signed on with Boardroom, and shot their sales into the stratosphere with his trademark fascinations, this ad isn’t so far from the level he was writing at for them in the late 80’s and early 90’s.

“For New Yorkers Who Would Rather Ride Bikes”