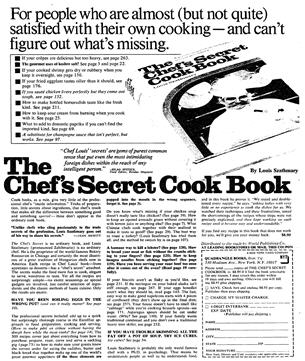 A few weeks ago I posted an ad from the pioneer of copywriting fascinations: Mel Martin. My subscribers wanted more so here goes.

There is no area in copywriting that’ll pay you bigger dividends faster than crafting great bullets. And who better to learn from then Mel Martin.

It took me over two years to turn these ads up.

Here’s Mel Martin’s: “For people who are almost (but not quite) satisfied with their own cooking — and can’t figure out what’s missing.”