Imagine a direct marketing/copywriting seminar from a parallel dimension.

And the rallying cry for this most unique meeting? “Why not the best!?”

If you’ve been to any events in the direct marketing arena, it’d be reasonable to conclude this was a parallel dimensional experience.

Yet it all was very real. 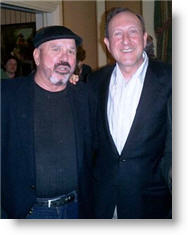 Of course, I’m talking about the Bencivenga 100 Seminar which took place in New York City fifteen years ago!

Since each attendee agreed not to disclose any of Gary’s proprietary information, the only way you can come by this — if it’s still available — is through his limited release set of DVDs which I’ll get to later.

Significantly, there were several attendees who had never been to a direct marketing seminar before in their lives.

Because these attendees were the real deal themselves — earning their keep as royalty writers with numerous controls under their belts or direct response players of the highest caliber — not some fairy tale wannabes who just because they’ve hung a shingle out online fancy themselves as the world’s greatest copywriter.

Bankrupt 37-year-old-marketer borrows the $5 thousand registration fee from his wife…and mom. The prospect of missing the Bencivenga 100 seminar was unacceptable

I would have given my eyeteeth to attend the Bencivenga 100.

Oh wait, I nearly did!

While I have no intention of taking this down a Horatio Alger path, a little back story makes the point.

Anyone who’s been able to positively channel the anger of being financially flat on his arse knows that great things can come of it. And putting all your eggs in one basket — even when you haven’t many — often leads to rapid breakthroughs. Such breakthroughs, despite conventional wisdom, couldn’t be achieved in two lifetimes of “playing it safe.”

Not so long before this event, I filed for bankruptcy. And like most who’ve gone down this path, it was the consequence of bad decisions and poor thinking.

When I received announcement that the seminar registration was opening up in February 2005, I did something which was very uncomfortable. In fact, I would have preferred sitting on a giant saguaro cactus. (I’m an Arizonan.) I went to my wife first…and later called my mom…and asked them each to lend me $2,500. I was strapped and this was the only way to ensure my place at the seminar.

A man of my age is supposed to be the one doling out the dosh. Not asking for it. But I had to go hat in hand if I wanted to be in New York in May.

A week later, I had a check in hand made out to “Accountable Advertising” and FedExed it Gary’s Garden City mailbox.

Now the pressure was on.

Not only did I want to settle my account with my wife and mom by yesterday, but I was returning to my city — New York — a place where I’d lived (and done nearly everything) for 15 years.

But I wasn’t just returning by myself. I’d be traveling with my wife and 16 month-old-son. On top of that, we’d planned a birthday party for my wife in New York and would be inviting our friends…some of whom were pulling in six figure bonuses on Wall Street.

I wanted to return as a winner…and the clock was ticking.

At the time, I had just developed my first info product which was a system for tracking down the most successful space advertising in history using giant but little known online databases. I pulled together all the testimonials I could and feverishly started contacting potential joint venture partners.

With several affiliates on board, I scheduled a launch in April, just a month before the seminar.

Info marketing: a great way to start the day

I’ll never forget the feeling of opening up my mail program on the day of the launch and seeing hundreds of opt-in confirmations flooding my inbox.

And there were orders too. Lot of them…with an accompanying “ding” sound as the order messages were downloaded.

That “Ding, ding, ding” sound playing over the next week assured this would be a great trip.

By the time we had touched down in JFK, I had taken in a little over $32,000. After subtracting affiliate commissions and expenses and putting some away for taxes, I had netted over $15,000. Five thousand went back to my lenders, five went in the bank, and the other five went in my pocket.

Now, when I say this went in my pocket, I mean literally. I had a a wad of fifty 100 dollar bills in my pocket. Walking around Manhattan with those C-notes tucked in my pocket quickly exorcised the negative feelings I had two months prior. And paying for everything with C-notes, from MetroCards to $800 restaurant tabs, gives you a feeling of power that plastic just can’t touch.

Four word statement is a lifetime guiding force: “Why not the best!?”

The seminar began on Friday, May 20th at the St. Regis Hotel. The energy level was off the charts. I’ve been to countless seminars before and since and nothing compared with the energy of that event.

Of course, the surroundings were more what one would associate with a roomful of i-bankers from Goldman or JP Morgan, not a group of copywriters and direct marketers.

Yet that was the very reason we were there.

Bencivenga was making a statement by holding the event at the St. Regis instead of the Hotel Pennsylvania. In fact, he started off his presentation by acknowledging his upbringing in Crown Heights, Brooklyn — a place that might as well be 1000 miles instead of the 11 miles it is from Midtown Manhattan.

That statement was: “why not the best?” The best of everything…in marketing and in life. And he was supplying us with the tools to have it.

Sounds a shade hyperbolic but this was the watershed event. Not to be repeated.

Some recent evidence of this.

A few months ago, I exchanged emails with an attendee who’s one of the top five royalty writers today. Unless you’re on the inside, he is not a name you’d recognize since he has nothing to do with the internet marketing game.

Here’s what he said about Gary’s seminar almost two years after the event:

My mind only captured a 1/100th of all of his good ideas. In fact, since the b-100 I’ve created some of my biggest breakthroughs ever. 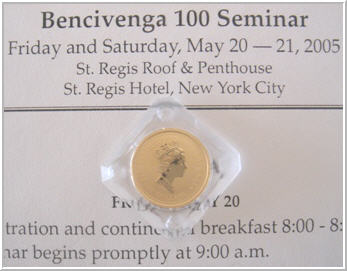 In a 2004 newsletter, Gary Halbert wrote about how Bencivenga gifted him with a solid gold coin. This was Benci’s Thanksgiving tradition of acknowledging someone who’s affected his life positively. Gary Halbert spoke of how meaningful this was to him despite the fact the coin was lost in one of the numerous hurricanes and discombobulations of his life.

Little did I know that I’d be leaving the seminar with a gold coin of my own: a .9999 grade quarter-ounce Australian nugget.

I and two other attendees: Roger Amerman and Joe Polish scored 10 of 12 in the “Pick the Winner Contest.” This was a contest in which two versions of a direct mail package were shown and each attendee chose which he believed pulled better. In most cases, the difference between the two packages was the headline.

It was a kick winning this contest given all the direct marketing and copywriting talent in the room. I chalk it up to one part luck and one part obsession with researching winning space ads.

Funniest scene at the seminar: Three world class copywriters — Jim Punkre, David Deutsch and John Carlton — all stepping out the window onto the fire escape twenty floors above street level.

The Bencivenga 100 Seminar DVDs: Anyone who did not attend the seminar missed the event of a lifetime. It wasn’t just the information but the surroundings, the superstars in attendance and the incredible energy. But if it’s a question of having the information verses not having it, then the DVD package is worth many multiples of $5,000.

When one of the winningest writers in the world today says two years after the fact: “my mind only captured a 1/100th of all of his good ideas” that speaks for itself.

Before the offer was opened up to the general public, every attendee was FedExed his own set of DVDs and a beautifully bound and copiously illustrated transcript. Though it took nearly two years to receive this, it was truly like getting a Christmas present in February. I’ve never seen such high production values before.

However there were only a limited number of sets produced so at the time of this reading, I cannot say whether it’s still available. All I know is my set is in a safe spot.

If nothing else, print this sales letter up, bind it and get out your highlighter. It’s off the persuasion charts.

In some respects, I wish Benci would get us on the “lifetime plan” a la Dan Kennedy. But that’s not Benci and that’s the whole reason the Bencivenga 100 was the lifetime event that it was.