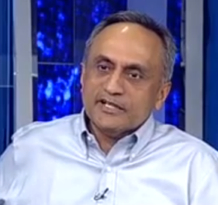 The “mystery monk” got his first taste of energy drink ten years ago at a trade show.

From his first sip, he knew he wanted a piece of this market but wasn’t ready to take on emerging giant, Red Bull.

Nor did he care to share fridge space with Coke or Pepsi.

So, he invented his own product category — the energy shot.

It’s the retail point of sale success story of the last ten years. His product is now located next to countless cash registers all across the country.

And, the “mystery monk?”

Until recently, little was known about him. He broke his silence in this must read Forbes article last year.

His private company went from zero to over a billion dollars a year in sales in short order.

His is one of the most interesting case studies you’ll run into:

During his 20s, Manoj Bhargava was a member of the Hanslock order and spent his time traveling between monasteries. “Monk” is the closest English language word approximating his role, and he still practices daily meditation for an hour each day.

When 5-Hour Energy hit the shelves in 2004, it was an immediate success.  “Truckers swear by it” is about as much copy as the product has ever gotten.

Between 250 and 300 companies, including Coke and Pepsi, tried to knock him off but failed and his company now controls 90% of the energy shot market.

With 500 million bottles sold last year, it’s no surprise 5-Hour-Energy attracted Food and Drug Administration scrutiny. Since 2009, 5-Hour has been mentioned in 90 filings with the FDA.

But the biggest challenge came at the end of 2012 when news broke that cited the possible involvement of 5-Hour Energy in 13 deaths. One of the deaths mentioned in the report involved a fatal car wreck where an empty shot of 5-Hour was found on the floor.

Mentioned in the same report was the publicly traded Monster Beverage which saw its share value almost cut in half in 2012.

Bhargava, who previously did everything to stay under the radar, responded with…

He bought plentiful online advertising where his customers were to be found.

But any company can take a lesson from this. Don’t wait for the crisis to “blow over” because sometimes it never does.