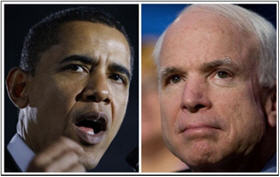 If you’re a serious entrepreneur, it’s time to get off the fence and take a stand.

At last, the issue is crystal-clear thanks to the guiding light of this U.S. Presidential Candidate’s 16-word-quote.

Hold your horses for a moment.

It’s important to keep in mind that while you’re reading this, hundreds of millions of collective hours are being squandered on the result of the 2008 U.S. Presidential Election.

But, this candidate’s 16-word-quote magically frees you from the banalities, empty platitudes and clinches that’ll consume the psyches of many Americans over the next six weeks.

“Get up in the morning and look in the mirror. You’re your own job security.”

And it’s got nothing to do with whether Bush is in power in the States, or Brown in the U.K. or Berlusconi in Italy.

It all depends upon you.

By now, you probably want to know which candidate was the source of this stark-reality quote.

Not surprisingly, he was a stellar success as an entrepreneur himself.

His name was Ross Perot and he hasn’t been a U.S. presidential candidate since the 1990’s.

Nevertheless, his advice crystallizes the belief entrepreneurs and business owners must foster if they truly desire super success.

Will the winner of the 2008 election make a real difference in your life?

That’s something you’ll have to answer for yourself.

Understand, we all know it’ll be an historical achievement for African-Americans if Barack Obama triumphs in this election. However, African-Americans in Bedford-Stuyvesant in 2008 will need to look in the same mirror as Irish Catholics in South Boston in 1960 for their source of well-being and success.

And since this website is a repository of direct response advertising, that brings me to the fundraising letter I received from Barack Obama last week.

From a copywriter’s perspective, it was marginally better than the letters I received from the Senator from the state where I live.

Neither one merits reprinting.

But Obama’s was decidedly more direct response in nature.

Here is his “order coupon.”

However, if you ask me, Obama is wasting his time with this approach.

Here is the kind of offer my subscribers might respond to. (Click the image below to enlarge.) 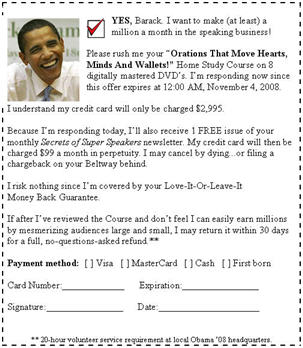