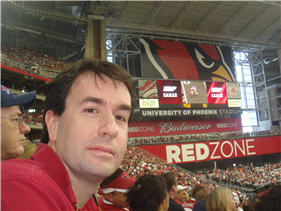 It’s been about two decades since I’ve been a “true” sports fan.

I like Winston Churchill’s definition of a fan or fanatic:

“A fanatic is one who can’t change his mind and won’t change the subject.”

I’m also partial to Eric Hoffer’s The True Believer: Thoughts on the Nature of Mass Movements.

Well, on Sunday, my wife told me it was high time to come down from the Ivory Tower and melt into the Red Sea of beer-swilling, trash-talking Arizona Cardinals fans, even though her allegiance is to the New York Jets.

And it was fun, not just from a marketer’s perspective.

The legendary copywriter, Gene Schwartz advocated reading junk, like The National Enquirer, as well as watching the explosion-dialogue-explosion-dialogue cadence of the Lethal Weapon film series to hone one’s ability to communicate with the mass market.

For my part, I attempted to count the number of advertising messages during the game.

There were so many inane ones, I gave up mid-way through the first quarter. The only one that seemed to stick was FreeCreditReport.com. Perhaps, because it’s an easy, three-word URL and appeared four or five times during the game.