What do advertising and martial arts have in common?

The world of general advertising is still largely clueless about sales. Many advertisers never make an offer or ask for the sale — they have no idea whether their ad’s been read, watched or listened to.

For many years, a similar blissful ignorance pervaded the world of martial arts.

Practitioners of most arts lived in a vacuum under the assumption their art was “it.”

They never matched their skills against martial artists of other disciplines. As they say in direct response advertising:

But there never was a way to find out who was better: the karate guy or the wrestler, the boxer or the grappler.

Until that is in the early 1990s, when the Ultimate Fighting Championship got under way.

It was the birth of mixed martial arts and it shined a bright spotlight on the dark corners of false assumptions everywhere.

One fighter highlighted this above all others.

Royce Gracie was a skinny jujitsu fighter from Brazil who donned a white gi and black belt.

He didn’t look like much, but he toppled fighters nearly twice his weight with lighting fast grappling moves most had never seen before.

Onlookers were stunned. “This can’t be happening!” was a common reaction.

Even after sweeping the first event, the doubters clung to the notion the result was a fluke. But after Gracie took the title again in the second and fourth events, there was no way to delude themselves.

Martial artists who spent decades training in their particular style had a bitter pill to swallow.

It’s was like a page from Tolstoy’s The Death of Ivan Ilyich, as he lay on his death bed with the question running through his mind:

“What if my whole life has been wrong?”

There are more than a few general advertisers who’ve had similar, painful epiphanies. 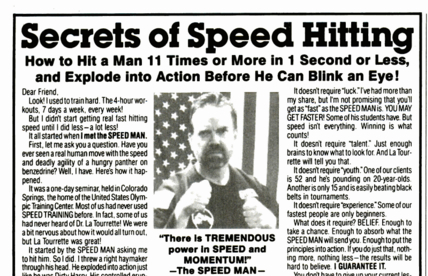 I don’t know if the “Speed Man” has ever tested his skill against martial artists from other areas, but I know this.

He’s got one of the BEST USPs you’ll ever see in any market and his ads have been going for a whopping QUARTER CENTURY.

Take a look at this print ad:

You don’t have to know or care anything about the myriad of martial arts out there to instantly GRASP this unique selling proposition.

And the teacher’s name of this memorable offer?

It’s as succinct as it gets.

Mind you this offer is not just some throwback to Black Belt magazine issues of the 1990s.