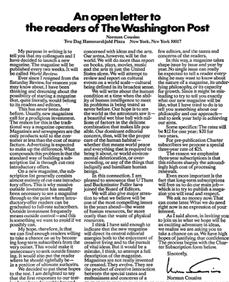 The open letter approach in copywriting is hard to excel upon.

The key factor you’ve got going for you with an “open letter” is just that — it’s a letter first and foremost — not an ad.

So, when Saturday Review Editor, Norman Cousins, was ready to launch his new magazine, World Review, he relied on the venerable open letter. Of course, it helped having the name recognition Cousins enjoyed at the time of this insertion in March of 1972.

This ad ran successfully three times in The New York Times before it was published in The Washington Post.

Here are the results:

All told, New York Times readers responded with $54,923 worth of subscriptions to advertising costing $15,571.

Harry Hockman, circulation director of World Review, commented: “I am glad and astounded . . . We have not changed copy or art and we are selling the product at full price. Still, two-thirds of the subscriptions from Times readers are for three years.”

One of the factors for the startling success of this print ad was the brilliant use of reason why advertising.

Throughout the ad, Cousins embeds reasons why that ultimately make the respondent feel more like an investor in an I.P.O. than merely a magazine subscriber.

This is where I see most advertisers across the board today falling on their faces — no reason why and no justification for a lower price.

Nother tidbit for you, and this applies to the now rare bird, the print advertiser. Inserting the name of the publication in the headline or the deck copy, “For Readers of XYZ Publication,” is a proven way to gain an often significant pop in response.

My purpose in writing is to tell you that my colleagues and I have decided to launch a new magazine. The magazine will be published every two weeks. It will be called World Review.

Ever since I resigned from the Saturday Review, for reasons you may know about, I have been thinking and dreaming about the possibility of starting a magazine that, quite literally, would belong to its readers and editors.

This has never been done before. Usually, new magazines call for a prodigious investment. The reason for this is the traditional way a magazine operates. Magazines and newspapers are the only products sold to the consumer at less than the cost of manufacture. Advertising is expected to make up the difference. What compounds this problem is that the standard way of building a subscription list is through cut-rate introductory offers.

On a new magazine, the subscription list generally consists almost entirely of cut-rate introductory offers. This is why massive outside investment has usually been necessary to see a magazine through to the point where introductory- offer readers can be graduated to full-rate subscribers. Outside investment frequently means outside control—and this is something we want to avoid if we possibly can.

My hope, therefore, is that we can find enough readers willing to take a chance on us by becoming long-term subscribers from the very outset. This would make it unnecessary to seek outside financing. It would also put the reader where he should rightfully be—in a position of ultimate authority.

We decided to put these hopes to the test. I am delighted to say that the first responses to our testing have been favorable beyond our most extravagant expectations. As a result, we are scheduling our first issue for late in the spring.

What about the magazine itself?

We believe that a magazine is essentially a reading, rather than a viewing, experience. In this sense, we will publish for a readership rather than a flippership.

The new magazine will be concerned with ideas and the arts. Our arena, however, will be the world. We will do more than report on books, plays, movies, music and the arts in just the United States alone. We will attempt to review and report on cultural events on a world scale — cultural as being defined in its broadest sense.

We will write about the human condition at a time when the ability of human intelligence to meet its problems is being tested as never before. Our hope is to see the world as the astronauts saw it — a beautiful wet blue ball with millions of factors in the delicate combination that makes life possible. Our dominant editorial concern, then, will be the proper care of the human habitat — whether that means world peace and everything that is required to bring it about, or world environmental deterioration, or overcrowding, or any of the things that indignify and humiliate human beings.

In this connection, I am pleased to announce that U Thant and Buckminster Fuller have joined the Board of Editors.

We will also give major attention to what we believe will be one of the most compelling issues in the years ahead — the waste of human resources, far more costly than the waste of physical resources.

I think I have said enough to indicate that the new magazine will direct its central editorial energies both to the enjoyment of creative living and and to the pursuit of vital ideas. But it would be a mistake, I think, to attempt a full description of the magazine. Magazines are not really created or invented. They evolve. They are the product of creative interaction between the special tastes and enthusiasms and concerns of a few editors, and the tastes and concerns of the readers.

In this way, a magazine takes shape issue by issue and year by year. No single issue can really be expected to tell a reader everything he may want to know about the nature of a magazine, its underlying philosophy or its capacity for growth. Since it might be misleading to try to tell you exactly what our new magazine will be like, what I have tried to do is to tell you something about our philosophy and our approach — and to seek your help in achieving our aims.

For pre-publication Charter subscribers, we propose a special three year rate for $25.

The reason we emphasize  three year subscriptions is that this reduces sharply the astoundingly high cost or processing renewals.

Even more important is the fact that long term subscriptions will free us to do our main job — which is to try to publish a magazine you will read and respect.

We ask no money now. That can come later. What we do need right now is an expression of your interest.

As I said above, in inviting you to join us in what we hope will be an exciting adventure in ideas, we realize we are asking you to take a chance on us. We have high hopes of justifying that confidence. The process begins with the Charter Subscription form below.