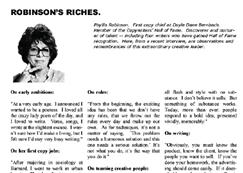 Phyllis Robinson was one of the major forces in late 20th Century advertising.

When Bill Bernbach opened the doors to Doyle, Dane & Bernbach in 1949 — what would soon become one of Madison Avenue’s dominant agencies — he recruited Phyllis Robinson to run the copy department.

She became the mentor to numerous copywriters and designers who blazed trails in the advertising world including: Paula Green, Julian Koenig, Mary Wells Lawrence and George Lois.