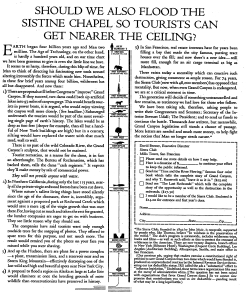 The companies have said tourists want only enough roadside trees for the snapping of photos. They offered to spare trees for this purpose, and not much more. The result would remind you of the places on your face you missed while you were shaving.

3) And up the Hudson, there are plans for a power complex —a plant, transmission lines, and a reservoir near and on Storm King Mountain—effectively destroying one of the last wild and high and beautiful spots near New York City.

4) A proposal to flood a region in Alaska as large as Lake Erie would eliminate at once the breeding grounds of more wildlife than conservationists have preserved in history.

5) In San Francisco, real estate interests have for years been filling a bay that made the city famous, putting tract houses over the fill; and now there’s a new idea still more fill, enough for an air cargo terminal as big as Manhattan.

There exists today a mentality which can conceive such destruction, giving commerce as ample reason. For 74 years, the Sierra Club (now with 48,000 members) has opposed that mentality. But now, when even Grand Canyon is endangered, we are at a critical moment in time.

This generation will decide if something untrammelled and free remains, as testimony we had love for those who follow.

We have been taking ads, therefore, asking people to write their Congressmen and Senators; Secretary of the Interior Stewart Udall; The President; and to send us funds to continue the battle. Thousands have written, but meanwhile, Grand Canyon legislation still stands a chance of passage. More letters are needed and much more money, to help fight the notion that Man no longer needs nature.*

*The Sierra Club, founded in 1892 by John Muir, is nonprofit, supported by people who, like Thoreau, believe ‘In wildness is the preservation of the world.” The club’s program is nationwide, includes wilderness trips, books and films—as well as such efforts as this to protect the remnant of wilderness in the Americas. There are now twenty chapters, branch offices in New York (Biltmore Hotel), Washington (Dupont Circle Building), Los Angeles (Auditorium Building), Albuquerque, Seattle, and main office in San Francisco.

(Our previous ads, urging that readers exercise a constitutional right of petition to save Grand Canyon from, two dams which would have flooded it, produced an unprecedented reaction by the Internal Revenue Service threatening our tax deductible status. IRS called the ads a “substantial” effort to “influence legislation.” Undefined, these terms leave organizations like ours at the mercy of administrative whim. [The question has not been raised with organizations that favor Grand Canyon dams.] So we cannot now promise that contributions you send us are deductible — pending result of what may be a long legal battle.)