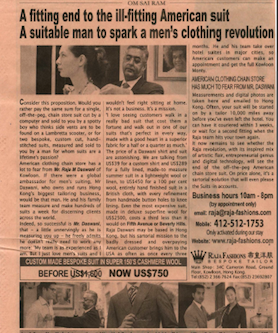 Raja Daswani, the founder of Raja Fashions, describes his operation as “Italian fabrics, German machines, English tailoring and Chinese labor.” Others have labeled it the “traveling circus of bespoke tailoring.”

A fitting end to the ill·fitting American suit had its first insertions in late 2004 and continues to this day. The ad is a mixture of the quirky, the comical and British colloquialism.

Consider this proposition. Would you rather pay the same sum for a single, off-the-peg, chain store suit cut by a computer and sold to you by a spotty boy who thinks side vents are to be found on a Lambretta scooter, or for two bespoke, custom cut, hand- stitched suits, measured and sold to you by a man for whom suits are a lifetime’s passion?

It’s followed by the laughably menacing line, “American clothing chain store has much to fear from Mr.  Daswani,” which is later used as a sub-head.

The story about the ad is as interesting as the ad itself. It was written in an evening by British journalist, Jonathan Margolis, who several years after the ad was successfully running, wrote a brief piece about it in the Guardian entitled: “The world’s worst ad? It was all my own work.”

Margolis is a very good features writer who appears to ocassionally moonlight as a copywriter. He’s certainly not a direct response person, which makes the story all the more interesting.

His article is self-deprecating and self-indulgent at the same time, and he throws in a good dose of hyperbole. But in all seriousness, Margolis claims his ad is “the most reproduced English text apart from the King James Bible and Shakespeare.”

We can’t fault Margolis’ enthusiasm for his effort.

Obviously, he’s unfamiliar with the stacks of ads with longer histories that were vigorously tested, including the fifty-year running advert for the Practical English Programme, also written about in the Guardian.

At the end of the day though, both copywriter and client were fortunate to hit a bullseye while wearing blindfolds on opposite sides of the world. Daswani’s previous ads, before Margolis came along, were the typical stabs in the dark most clueless advertisers attempt.

The only continuity with Daswani’s earlier advertising is the greeting at the top of all his ads, “Om Sai Ram,” from his spiritual guru, Sathya Sai Baba.

I doubt Margolis had the chance to ask him:

“What does it mean?” and “How does this mysterious line aid response?”

No doubt Daswani would answer he just wants it in the ad, along with the picture of his spiritual guru hanging on the wall of his fitting room. (“Om Sai Ram” is a greeting referencing the one God in you and I.)

There’s no end to the peculiarities of some advertisers, and the copywriter, no matter how experienced, will never be able to disabuse them of these.

In the article from early 2009, Margolis claims to have written another ad for his client “with a recession theme.” Despite the assertion that his client was selling more suits than ever, there’s no sign of this insertion and the same ten year old ad is still running.

The takeaways from this are clear.

This ad is a testament to the fact that there’s no formula for writing a winning ad and that even a copywriting outsider is capable of penning a midnight winner.