Why do I need it and why do I care?

That’s been my reaction for the last two years.

I first heard about Twitter over two years ago when my friend Joe Orr told me about it at the System Seminar. That would be the closest I’d come to getting on Twitter until two weeks ago.

So, why did I sit on the sidelines for the last two years?

I guess I’m one part late adapter and one part contrarian. Plus, I just didn’t see why it mattered when I have healthy email and direct mail lists. That was my “case against Twitter.”

Well, I was pleasantly surprised to discover there’s much more to Twitter than I ever imagined and the traffic explosions to this site are proof of that. 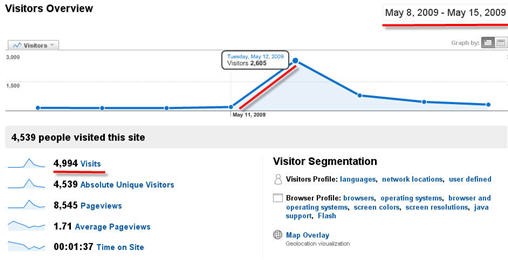 As a marketer and copywriter, I see Twitter as both a marketing channel and a testing medium.

As a marketing channel, it’s ideal for these reasons:

And as a testing medium it’s fabalicious (made up word).

Craft your pithiest tweet or headline and plug in a URL. If it’s hot, you’ll see a stampede of traffic heading to the page — provided it’s one of your own sites with Analytics installed. If it’s not hot, you’ll see the tumbleweeds blowing by.

Besides getting an 800% spike in traffic in one day, I’ve been noticing traffic from diverse sources that I’ve never seen before. 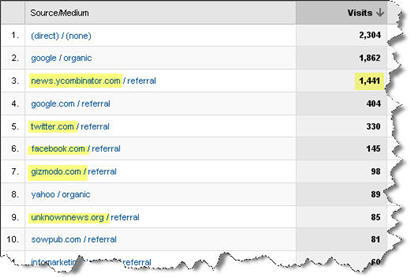 These stats are from the first two weeks in May.

Ycombinator.com? Never heard of it, yet it sent 1,441 visitors in a day.

Twitter seems to set off little firestorms of traffic in the most unusual places. Yesterday, one of the About.com editors created a link to one of this site’s pages. Again, never had that happen B.T. (before Twitter).

Most importantly, the bounce rates, TOPs (time on page) and CTRs (click through rates) were very respectable.  Ditto for conversion to opt-in.

As a comparison, this site has appeared on the home page of StumbleUpon.com several times and the traffic has been about as untargeted as it gets. Bounce rates in the 90’s and 10 seconds time on the page.

Moreover, I’ve noticed the weekend traffic — the lightest of the week — has picked up by 50%.  Whether this will last over the long haul is anybody’s guess but the short term results alone are worth reporting.

Here are some of my observations after being on Twitter for two weeks.

How important is it to amass followers?

It seems to me that the rules of quality list building apply here. Though a DM or email list is by no means a pure analogy to Twitter. I’d rather have a relevant, responsive list of 1,000 people who KNOW me instead of 100,000 random names or in this case, followers. Though unlike the direct mail world where there’s a cost associated with dead weight names, there doesn’t seem to be a downside to having meaningless followers in addition to relevant ones. Plus, it seems the sheer force of inertia kicks in at some point and the followers just keep coming. Take a look at Shaq or Ashton Kutcher on Twitter.

You follow me and I’ll follow you seems to be the unwritten rule for most Twitterers because that’s what makes your list of followers grow the fastest. In my case, except for “follow spam” I follow in kind, those who follow me. But after two weeks of using Twitter, it seems clear that one needs multiple IDs to have a sane user experience. At the most basic, one marketing/business ID and one personal ID, though a pure marketer would segment each and every niche into separate ID’s.

Is it possible to effectively Twitter with all the spam tweets?

What’s true in the broader marketing world is also true on Twitter. 80% of the people usually get it wrong. A smaller percentage will be more or less on target. And a smaller percentage than that will win most of the marbles. Understand, I’m talking about using Twitter purely for marketing and lead generation.

My case in point are all the annoying direct messages one gets bombarded with after following another Twitter user.  Like:

Never mind that I don’t know where Klamath Falls is, nor desire free travel advice — especially not free travel advice, nor wish to get fit “physcally” fit (his spelling, perhaps a combination of physically and fiscally?)

Of course, the deluge of messages are about how to get more Twitter followers and make more money or some combination of the two.

So, when a smart marketer sends a tweet, it tends to rise above the noise. The ones who do this consistently become the thought leaders.

And speaking of smart marketers, if you’re going to offer a free widget or a “Twitter trinket,” why not make it one with universal interest. Here’s a neat one that Malaysian marketer, Kenneth Yu, has put together called The Dark Side of Twitter.

Anyway, to wrap it up, in just two weeks, I’ve gone from Twitter apathetic to really appreciating the service and planning new ways to market using the Twitter channel.