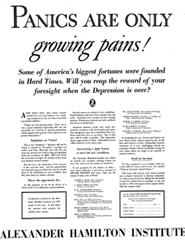 The headline: “Panics Are Only Growing Pains!”

Subhead: “Some of America’s biggest fortunes were founded in Hard Times. Will you reap the reward of your foresight when the Depression is over?”

The ad was written for one of Barton’s flagship clients, The Alexander Hamilton School, the then preeminent self-improvement organization.

Barton’s solution for getting through the Depression of the 1930’s is just as valid for the Recession of 2009 (and likely beyond). The solution is found by pondering the question, “will you reap the reward of your foresight when the Depression is over?”

Since “foresight” can only be fostered in a climate of opportunistic thinking, it means turning off the bombardment of negativity that pervades the airwaves, news sites and water cooler chit-chat. Moreover, it means having the courage to stand alone and pursue your own course while most everyone else around has his head in the sand…or is cursing the times.

Because let’s face it.

There’ll be plenty more bank, auto and insurance bailouts to come. Undoubtedly, there’ll be other industries appearing from out of the blue and crowding in line behind them.

We can also count on more fraud meisters the likes of Bernie Madoff and Sir Allen Stanford being uncovered, now that their credit spigots have been turned off.

And there’ll be some new gremlins pounding on the wings of the aircraft.

But when a clear headed marketer or entrepreneur asks…”what’s this have to do with me?”

It’s still a GREAT time to be in business.

So, how will you reap the reward of your foresight when the recession is over?

Panics Are Only Growing Pains by Bruce Barton (171 KB PDF)