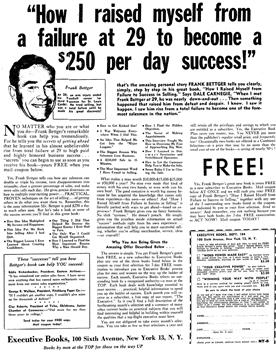 After reading Victor Schwab’s spectacular (for the 1950’s) bullets, I’ve pulled “How I Raised Myself From Failure To Success Through Selling” for a needed refresher.

I am making a guess that Victor Schwab not only wrote the ad for the book but also the chapter titles. Schwab’s extensive track record at that time included the world class ad for “How To Win Friends And Influence People.” That was also the headline for the ad. One of the few instances in which the title of the book is so good, it’s impossible to come up with something better.

Bettger understood the power of great copy and smartly turned the chapter titling over to one of the world’s best ad writers rather than a book editor.

Keep in mind these bullets were written in 1950. It’d be another twenty years until the modern bullet was crafted by Ralph Ginzburg and Mel Martin.