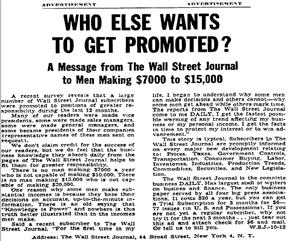 I haven’t run into a recent print ad sporting a “Who Else Wants?” headline in a long time. Maybe there’s a reason for that.

Online however, it seems like most offers for yesterday’s obsolete doohickey come today’s big launch, embrace this headline as their sole method of attack.

It’s origin supposedly comes from: “Who Else Wants a Screen Star Figure?” I haven’t been able to find the original ad.

The idea behind it is the power of social proof. Everyone else is doing it. Why not you?

Undoubtedly, it worked well in this 47 year old Wall Street Journal ad which had numerous insertions. This ad combined the social proof trigger with a laser honed, qualifying sub-head.

But now it’s time to put it to rest.

This headline is so overused that instead of grabbing attention, it repels it. By definition, if most marketing messages look the same, they cannot be effective.

The good news is even the Neanderthal marketers who mindlessly swipe each other don’t have to evolve to hike response. Not much anyway.

All they need are some new headline templates.

Let’s use Mel Martin’s brilliant and “unknown in 2007” approach.

With it, we can transform the Neanderthal version into a fresh and more powerful approach.

New approach (based on Mel Martin):

For website owners who are almost (but not quite) satisfied with their traffic volume — and can’t figure out how to get more:

What I like about Mel Martin’s headline is it strikes a chord that almost everyone feels. Things are okay but whatever it is that can make them better is somehow eluding us.

I’m doing some split tests with Mel’s headlines right now and they are kicking tail.