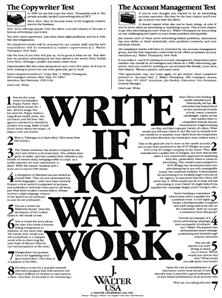 Great advertising can do a lot.

But what self-respecting copy junkie wouldn’t love an ad that rendered the H.R. department obsolete and built a team of killer copywriters in the process?

When J. Walter Thompson ran its first “Write If You Want Work” ad in 1984, it was flooded with response from thousands of wannabe writers.

Ten respondents to the original ad were invited to join J.W.T.

And now, thanks to the magic of search engines and blogs, we have the long awaited answer to the most thought stumping of the original eight “entertaining and involving” writing assignments, “How To Sell a Telephone to a Trappist Monk…Who’s Observing the Strict Rule Of Silence,” provided by the very first writer to be hired as a result of the copy test, Chris Grabenstein.

J.W.T, then under the direction James Patterson, best known today as the prolific page-turning mystery writer, followed up on the success of the first ad with this sequel in 1989, after the agency had exhausted the best candidates from its five-year-old file.

The sequel ad offered an account management test on top of the original copywriter test.

“The Copywriter Test” saw three new assignments including these.

#5 “You are a writer for Walletsize Books. Describe the history of the United States in 100 words or less.”

#8 Develop a script for a popular network television program that will convince the show’s millions of viewers to each send in a dime. (You have 30 seconds to be convincing.)”

Most marketers would label #8 as a red herring. It’s not cost-effective trying to convince 10 million viewers to send in 10 cents when one million-dollar viewer will do.

On “The Account Management Test,” I’m partial to these.

#3 “You’re heading a committee which must select a speaker for a political event. A civil rights leader, a fundamentalist evangelist, and a left-wing radical are also on the committee. How do you get a consensus from this group?”

#5 “You can ask anyone (living or dead) out to lunch. Whom would you choose and why? What would you talk about over lunch?”

Among the account-exec respondents were a doctor whose proudest moment was dissuading South Africans from their bizarre practice of packing newborns’ umbilical stumps with cow dung and a lady from Bermuda who offered to invite God to lunch and remain calm “when He turns the water into Montrachet behind the waiter’s back.”

Another respondent was a clown (red nose and all) who piecemealed his answers to the application onto postcards which he delivered at the rate of one per day.

James Patterson began his career at J.W.T. in 1970 by taking such a copy test where he was asked to critique existing campaigns. The practice faded in the late seventies.

Patterson said of this test, it “isn’t a sole criterion, but those who knock it cold will do well in this business.”